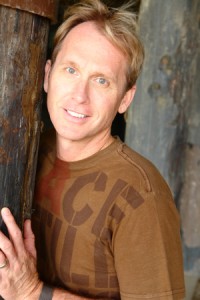 We already told you that “Sordid Lives” writer Del Shores is in Atlanta making his next movie. What’s new is that he’s dishing dirt on his career in a stand-up show on Friday at Jungle, and he gave us a candid preview.

“I never even know what to expect that’s gonna come out of my mouth,” Shores says. “But I decided with this show to just say what’s on my mind. It’s so politically wrong, things a lot of us think but don’t say. I have lots to confess that I certainly have never admitted in public until now.”

“Sordid Confessions” is Shores’ one-man show in which he holds no punches on everything from his “slut years,” to those who done him wrong in a career that includes the popular but ill-fated “Sordid Lives” TV series. Read to the end to enter for a chance to win free tickets to the tell-all show.

“Beware all those people who are asssholes bitches and dicks, because I’m going to say something about it in public,” Shores warns.

The multiple award-winning playwright and screenwriter talked with us from his Atlanta hotel room about the one-man show, actors and crew he considers family, and even the future of the “Sordid Lives” franchise. In case you didn’t know, Shores (top photo) is the man whose career took off with the 1987 play “Daddy’s Dyin’ (Who’s Got The Will?)” and the subsequent 1990 film. He is best known for his 1996 play “Sordid Lives,” which became a film in 1999 and later gave birth to the 2008 TV series on Logo. He was also a writer on “Queer As Folk,” “Dharma & Greg” and other shows.

Shores stand-up performances are not only no-holds-barred, but they’re as hilarious as you might expect from the creator of such hits. Newly on Paxil (“so I don’t give a shit anymore”), Shores says that an early performing career led to the writing, which ultimately came full circle with a return to the stage.

“I certainly never thought I’d be on stage telling stories,” he says. “But it turns out that things I say after a couple of cocktails that make people laugh in a bar will make people laugh from the stage. I don’t hold back. It’s going to be a rockin’ good time.”

And he’s looking to set an attendance record in Atlanta, a city that Shores says he “adores.” A Dallas performance last month brought in 250 people, and “I think Atlanta can knock that one down no problem,” he asserts.

Shores has plenty of material to pack the house. His long list of other work includes plenty of TV credits and plays including “Southern Baptist Sissies” and “The Trials and Tribulations of a Trailer Trash Housewife,” which he is turning into a movie right here in Atlanta.

In “Trailer Trash,” the beloved Beth Grant (second and bottom photo) of “Sordid Lives” fame who went on to such heralded works as “No Country For Old Men,” plays main character Willadean Winkler. Willadean is imprisoned by domestic violence in a trailer, and the stage version of the tragic-comedy has garnered Shores some of the best reviews of his career. 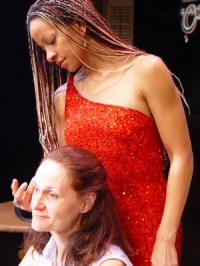 “I’m so lucky as her star power rises to have her,” Shores says. “In fact, that’s true of the whole cast. I was lucky to get the entire original cast to Atlanta for the film.”

The rest of the cast includes David Steen, who played GW in the “Sordid Lives” series, as the husband. Also look for Dale Dickey (middle photo with Grant), who is also a “Sordid” alum and most recently scared the shit out of audiences as Nerab in the Oscar-nominated “Winter’s Bone.” The cast also includes singer Debbie Holiday (bottom photo with Grant), who did the hit dance duet “Party Around The World” with Shores’ husband, actor Jason Dottley. (Shores and Dottley mingled with fans during a break from a ‘Sordid’ run in Atlanta last year.)

And after this project, what’s going to happen to “Sordid Lives”? Oh it’s not over, children!

“The bad news is that the series is over, but the good news is I still have stage and film rights,” Shores says. “So we are looking to do two more ‘Sordid’ films in the future and then say goodbye to the franchise. The thing that’s wonderful about the franchise is that it’s alive and well. Our fans are our employers, so we want to continue to deliver to them.”

Pre-production for “Trailer Trash” is going on now, and shooting takes place in Atlanta from March 17 to April 9.

“We’re comfortable with that schedule because we’re all so familiar with the material,” Shores says. “It’s a closed set, but look for us in the bars. We love Atlanta, so we’ll definitely be out.”

Until then, hang out with Shores and get an earful of “Sordid Confessions” on Friday at Jungle. Tickets are online for $20 reserved seating or $15 general admission, but Project Q Atlanta is giving away one free pair to a lucky winner. {encode=”[email protected]” title=”E-mail us”}, put your full name in the body of the e-mail and “Sordid Lives Tickets” in the subject line, and we’ll contact and announce the winner on Friday.

UPDATE: Congratulations to Project Q Atlanta reader Del Smith. The name-alike fan of Del Shores wins tickets to the “Sordid Confessions” show. Thanks to all who entered the giveaway.