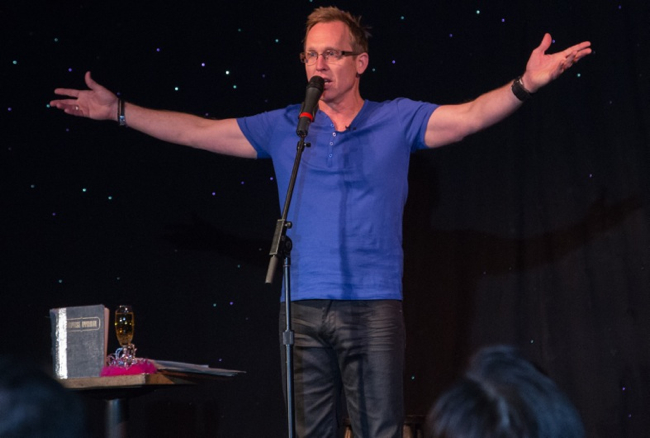 Atlanta is like a second home to Del Shores’ prolific library of gay films and plays. Shores descends upon us again on Wednesday for a near sold-out benefit screening of his award-winning play-turned-film “Southern Baptist Sissies.”

After winning the 2013 Audience Award at Atlanta’s Out on Film for Best Men’s Feature, Shores and “Sissies” (trailer above) return triumphant to Plaza Theatre for Wednesday’s event that benefits AID Atlanta. It’s one of the Best events firing up Atlanta’s gayest month.

Project Q caught up with the actor, writer and director to chat. He dishes openly about the ups and downs of trying to make the film during a 12-year evolution of the production, tweaks he made to update the film, and why he feared the production might become a “period piece.”

For anyone who has grown up in the South, and especially the deeply religious South, “Southern Baptist Sissies” strikes a chord. Why was it important to make this into a film?

The things about “Southern Baptist Sissies”—I am so passionate about that piece because over the years so many young men and women, especially in the South, have written me. People saw their stories, saw that, ‘This is me and I am not alone.’ I literally had one kid that came to L.A. to wait for me outside of a theater to tell me that the play, when it played in Dallas, had saved his life—that he had not killed himself because of the play. Getting these letters made me know that I had to keep trying to get it to a broader audience.

And this wasn’t the first attempt, right? With a false start in 2009, would you describe the journey to getting “Sissies” on film as tumultuous?

This incarnation was not once we decided to do it this way. But in 2009, we had teamed up with Funny Boy Films, who did “Latter Days,” “Adam and Steve” and “Naked Boys Singing.” We were in production, sets were being built, actors were being cast, and so it was just a nightmare when it fell apart. I was told there was a major investor that fell out and it had aborted the entire production.

I always thought that it would become a period piece. Bigotry would die out. Just look at all that is happening for us; we have 19 states and several pending. In that I think Leslie Jordan actually said it when we were doing interviews for our Indiegogo campaign. He said, ‘What this equality march has done is fueled and people are hearing the rhetoric again.’

Yes, there are some amazing changes. I just found out there is a Baptist church in Louisville that is marrying same-sex couples or performing commitment ceremonies.  But on the other hand, you have those YouTube videos that go viral where a pastor in North Carolina says to round us up and put us in electric fences and drop food until we’re all dead. So these kids are sitting in pews, and I kept thinking, ‘How can we tell this story?’

How did it finally get made?

Emerson said, ‘Why don’t we start with “Southern Baptist Sissies” and stage the play and film it?’ When he said that, I was like, ‘Why didn’t I think of that?’ …

So I just put my three hats on—theater, television and film— and combined them using three cameras like I have in sitcoms and staging it like a play and filming it like a film not knowing if it would work. But thankfully it did. We’ve been very fortunate that the film has played at 27 film festivals and won 15 awards—nine of them being audience awards, and it’s done exactly so far what I wanted it to do. It’s touching and healing lives.

A majority of the film was funded by fans—

We have to always honor—we just went to the fans and said we were going to do this and said can you help us. The money just came in. Again the people who shared the passion said we want to see this made. So many people who had damage in their own lives, who have no resources financially in their own lives, they said we will help you and we raised about $150,000 from crowd funding.

We were able to make a very compelling Indiegogo campaign video about how passionate we were and people really responded to that. But it wasn’t just the support of the fans; we suddenly had celebrities tweeting for me. Lisa Lampanelli was tweeting for me; Allison Janney was tweeting for me; Olivia Newton John was tweeting for me. Olivia came in as a very big contributor for the movie because she had a bus driver who was damaged by the Baptist Church and ultimately took his own life, so there were these major connections—like Kathy Najimy, a good friend of mine, tweeting for us. The viral of it was crazy for us and exciting and humbling. We had no idea that it would do this.

The play debuted in 2000, and in late 2012 you were crowdsourcing funding for the film version. Was there a difference in your mentality as a creator in the 12 years between?

I sat down with the script when I knew we were going to shoot it because I did not want it to reflect that it was a period piece. I wanted to update it. But you know I didn’t have to update it that much. Unfortunately, sadly, I didn’t. All I had to do is make a few little alterations.

Simple things. Odette, Dale Dickey’s character, she worked as a directory assistant operator at one point in her life. That’s all but gone away so I made her a 911 operator, which was hysterical to think of this drunk woman trying to guide people to help when they’re in peril.

And then I wanted desperately to work with Ann Walker again. She had created the role of Odette on stage originally, but I wanted Dale to do that role so I rewrote Benny’s mom into a grandmother just to accommodate her age.

Casting Willam Belli in the role of Benny—he has this rant. It’s the ‘Fuck You’ rant where he’s like, ‘Fuck Michele Bachmann, Sarah Palin, Rick Santorum’ and all I had to do was basically update the haters. I just had to replace the Trent Lott's and Jerry Falwell's for some of the current haters.

One other tiny change is when Andrew references “St. Elmo’s Fire” and his crush on the brat pack. I just made it the *N’sync boys and that was hysterical. So that’s it.

How did you capture it all on film? What was your process?

We just rehearsed it like I do any play. I directed the actors like I do a play and at that point, shot it. We had four audiences. We shot four live shows, with 12 different camera angles, so we really got a lot of coverage.

Then for eight days we shot it without an audience, as I do a film. It brought the actors, especially with the intimate scenes, into a more filmesque mode performance wise so it was more realistic and not so stagey. Then the challenge of course was in the editing to blend the live and film versions so it felt like one night at the theater

The filming was fast and you had both old and new cast members. What was the energy like on set between those new to the production and those who had lived with it since its debut as a play?

They’d been away from it so long that it was like returning to a good friend. It really was, for all of us. This play had such a special place in my heart during the time it ran, as it did for Leslie and Dale Dickey and Newell and Rosemary Alexander, who recreated their roles. They gladly returned to them, and they knew the impact that it had. We knew weren’t doing this for money. We all did it for passion.

The original Sissies had of course aged out of those roles, but my four new Sissies were stunning and staggering to work with. Emerson Collins is brilliant in the lead. I had two of the boys from my play “Yellow, “Matthew Scott Montgomery who played Andrew in the movie and Luke McClure who played TJ.

Then Willam Belli. I didn’t know his drag career when I met Willam. He was in one of my workshops, and I had a huge respect for Willam as an actor before all the crazy started happening in his life. When we went to cast it, his celebrity was an influence in using him, but I will not work with anybody at this point in my career that isn’t great, so his acting had to be there too. It was a dream cast from performance to the spirit. I always say this but there wasn’t an asshole in the bunch.