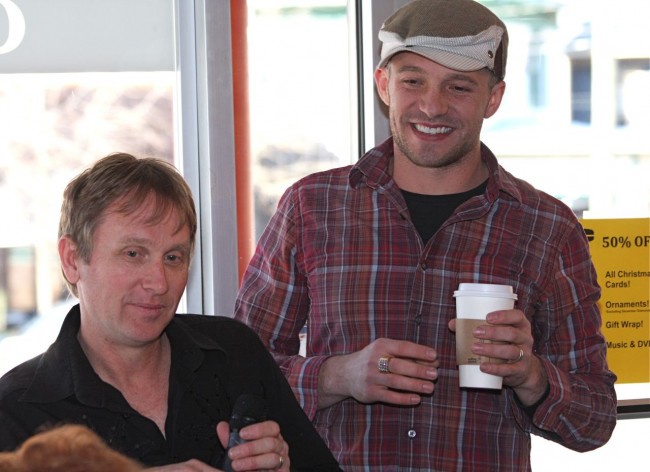 Del Shores, the playwright and screenwriter behind the “Sordid Lives” franchise, announced Sunday that he and actor-singer Jason Dottley will end their 10-year relationship. Dottley is asking for privacy. The news is playing out on Shores’ Facebook page, where the writer, 48, first announced Dottley’s decision to leave him. Since Sunday, fans and friends are leaving messages of support as Shores (photo, left) continues to post expressions of sadness including a video from the couple's 2008 legal marriage ceremony. The Facebook fan page for Dottley (right), who turns 31 in December, also includes well wishes from fans but just one message from his camp about the break-up:

"Jason Dottley's primary concern at this time is the well-being of his family. The situation is very upsetting for everyone; and his priority as he begins moving forward is to honor and cherish his 8 years of marriage to Del Shores. Jason wishes to thank his friends and fans for their support, but requests that the media maintain respect for his family during this difficult time." Chad Calaway, manager

The pair have become Atlanta favorites in recent years. They visited Outwrite during a break from “A Sordid Affair” last year, shot Shores’ yet-to-be-released film “The Trials and Tribulations of a Trailer Trash Housewife” in Atlanta earlier this year, and Shores brought the autobiographical “Sordid Confessions” standup show to the stage at Jungle not just once in March, but again in July with Dottley debuting his first single as a dance music recording artist. Here is Shores’ amicable but sad announcement of the split.

To my fans and friends: It saddens me to inform you that Jason Dottley and I are divorcing. I will always cherish the almost ten years that we were together -- married for eight, legally for three. Jason was a wonderful husband to me and a great step-father to my daughters. I will miss being his husband. Jason and I both fought hard for marriage equality, and I will continue to fight that fight until gay marriage is legal nationwide. Our divorce only proves that like straight people who have the right to marry and divorce, we are all equally human. I know we are going to disappoint a lot of people and for that, I am truly sorry. But I will never feel that we failed, and I have no regrets. This was not what I wanted, but I must now accept what Jason wants. I only wish him the very best and will celebrate his continued success. I've had lots of losses in my life, and I've found that I heal when I turn to my pen, my writing and my work. I promise you more twisted stories, that will make you laugh, think and maybe shed a tear or two. I welcome any words of support, but this is so hard, and privacy is important to me and my daughters during this difficult time. Del Shores