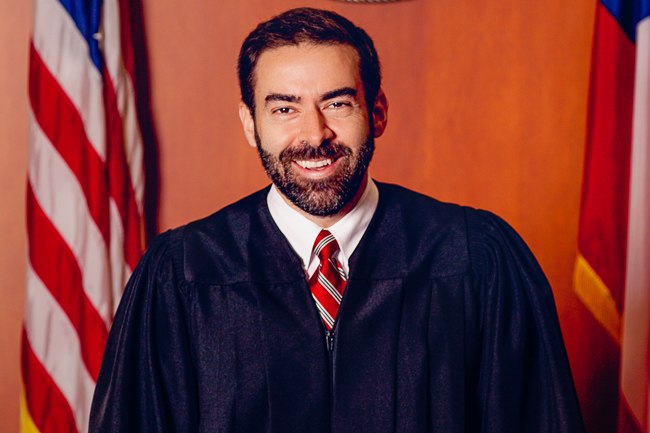 Jacobs has served on the DeKalb State Court since 2015. He previously served in the Georgia House from 2005 to 2015 representing House District 80. On Tuesday, Jacobs shared with Project Q Atlanta a statement about his coming out as bisexual.

Two weeks ago at an event hosted by the Stonewall Bar Association, I came out publicly for the first time. I am bisexual. My wife Evan and I have made a mutual decision that it would be a positive step for me to come out, and she proudly stood with me at the Stonewall Bar event.

DeKalb County is home to a substantial LGBTQ population, probably the second largest of any county in our state. I see LGBTQ citizens in my courtroom on a regular basis, particularly as prospective jurors, and in other courtroom roles as well. DeKalb County has never had a trial judge who openly identifies as LGBTQ. This is something I can change simply by sharing this part of who I am with the public.  Of course, my identity has no effect on my work as a judge. It is my solemn and absolute duty to deliver fair and impartial justice for every citizen. However, this decision to come out does help show the broader community the diversity of our bench.

More importantly, Evan and I are the parents of three wonderful children who are growing up quickly. We are happy they are growing up in a world in which young people can be who they are as soon as they recognize who they are. We want that world to be a reality for them. The most meaningful contribution I can make to that world is to be authentic myself.

I am hopeful the decision Evan and I have made will help others. Coming out, or at least knowing there are others like us, is just as affirming and significant for bi people as it is for other members of the LGBTQ community. I have chosen to be a positive role model in this regard.