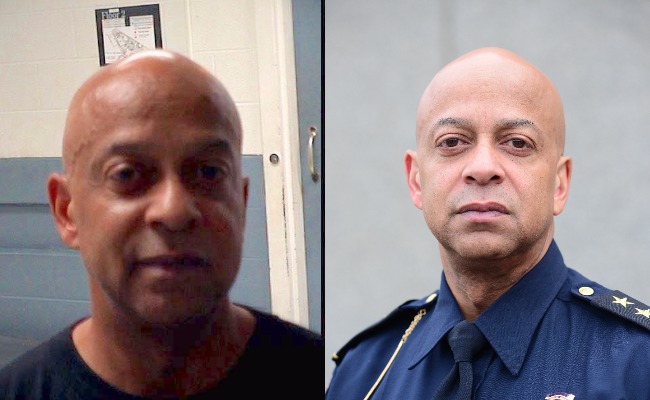 DeKalb Sheriff Jeffrey Mann – arrested late Saturday as he allegedly cruised for sex in Piedmont Park – now faces calls for his resignation and an investigation from the agency that licenses law enforcement officers across the state.

But Mann remains atop the DeKalb County Sheriff's Office as the controversy swirls around him. About 11 p.m. on Saturday, an Atlanta police officer arrested Mann after he allegedly exposed himself and masturbated in front of the officer in an area of the park known for men seeking men for sex. When the officer identified himself, Mann apparently fled across 10th Street and ran for a quarter-mile before surrendering. Mann had two condoms in his pocket when he was arrested, according to an incident report.

Mann faces two misdemeanor charges – indecency and obstruction. But the criminal case against the sheriff is likely to be the least of his troubles. Via AJC:

Dunwoody defense attorney Esther Panitch, who is not involved in the case, said Mann will likely qualify for pre-trial intervention, which is reserved for offenders with no prior criminal history charged with misdemeanors.

If approved for intervention, which is at the discretion of the prosecutor, Mann would not have to enter a plea on the charges against him and would disappear pending completion of community service or payment of a fine.

“It would be like it never happened,” Panitch said.

More serious is that Mann's arrest is prompting an investigation by the Georgia Peace Officer Standards & Training Council, which certifies law enforcement officers across the state. If Mann's certification was suspended or revoked, he could be booted from office. Via Decaturish:

Reactions to Mann's arrest have ranged from cautious to calls for his resignation.

Terry Norris, executive director Georgia Sheriffs’ Association, said state law allows the governor to appoint two sheriffs and the attorney general to review any allegations against a county sheriff. A sheriff can be suspended for up to 90 days, under that process. Using that same process, the governor could request the county’s district attorney to petition the courts to have the sheriff removed.

“It’s behavior that’s unbecoming to anyone, particularly a sheriff or peace officer, if the charges are accurate,” Norris said.

Mann initially told WSB that his arrest was a misunderstanding that he was working to clear up. On Monday, he didn't report to work and since his attorney, Noah Pines, told the sheriff not to speak publicly about the incident. Pines released a statement to media outlets:

Sheriff Mann would like to thank his supporters for the many phone calls and prayers he received over the weekend.  While Sheriff Mann would like to address his supporters and the public, I have instructed him not to make any statements regarding the ordinance violations he is facing.  Similarly, as is my general practice, I will not discuss the charges at this time.

Sheriff Mann will continue to run the DeKalb County Sheriff's Office at the level of excellence it is known for and in keeping with what the citizens of DeKalb County expect and deserve.  He asks that you respect that this is a personal matter, which should have no bearing on the DeKalb County Sheriff's Office and its staff.  He has great respect for the men and women of law enforcement and he asks that you continue your support of them and the public service they provide.

One of Mann's supporters and a former campaign publicist for him, Angela Moore, questioned the allegations with an unfortunate choice of words for the 55-year-old unmarried sheriff. Via WSB:

“Nothing is ever as straight as it seems,” she told Jones.

[photo: Mann's mugshot after his arrest and an official portrait as sheriff]