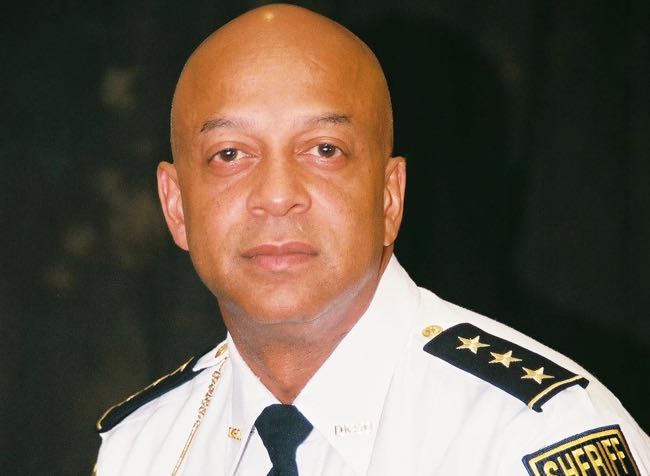 DeKalb County Sheriff Jeffrey Mann was arrested late Saturday as he allegedly cruised for sex in Piedmont Park and exposed himself to a male Atlanta police officer.

Mann was arrested as he ran from the officer who spotted him, according to an incident report from the Atlanta Police Department. He was caught only after stopping to tie his shoes.

Mann – who told WSB that the arrest was a misunderstanding – had two condoms in his pocket when he was arrested, according to the incident report.

Mann, 55, faces two misdemeanor charges – indecency and obstruction. He was arrested about 11 p.m., booked into the Atlanta City Detention Center and released on Sunday. His arrest was first reported by the AJC on Sunday.

On Saturday, an Atlanta police officer dressed in his bicycle uniform was on foot patrol in the southwestern portion of the park and noticed Mann, “in an area known for sexual acts after dark.” (It is.) Street lights along 10th Street allowed the officer to see Mann, according to the incident report.

The officer is identified only as Officer Snell in the report.

Snell stood next to a tree to hide the reflective stripes on his uniform. When Mann was less than 10 feet from him, the officer shined his flashlight on him. Mann then allegedly ran.

“The male immediately fled on foot. I ran behind the male while yelling, 'police, stop!' The male looked back at me multiple times but continued to run towards the sidewalk and street,” the officer wrote in the incident report.

Mann ran across 10th Street and turned onto Argonne Street, where he stopped to tie his shoes, according to the incident report. As the officer approached, Mann allegedly fled again, this time running to 9th Street before finally surrendering in the 300 block.

That's when Mann was ordered to the ground and arrested, according to the incident report.

“The male stopped running and started following my verbal commands. I advised the male to get on the ground and to put his hands behind his back while on the ground. The male did so,” the officer wrote in the report.

The foot chase lasted for about a quarter of a mile, according to the incident report.

As the men walked toward the officer's patrol car, Mann asked to retrieve his identification from his car. The officer refused. Mann then asked to speak to a supervisor, which he eventually did at an Atlanta police precinct. Mann's keys and vehicle were released to a co-worker, according to the incident report.

Mann, a U.S. Air Force veteran, attorney and longtime top official in the DeKalb County Sheriff's Department, was appointed as the county's 49th sheriff in 2014. In July 2014, he won a special election to the office and won re-election to a full term last November.

On Sunday, the sheriff's office confirmed Mann's arrest in a brief statement. Via 11Alive:

“DeKalb County Sheriff Jeffrey L. Mann was arrested last night, May 6, 2017, by the City of Atlanta Police Department on charges of indecency and obstruction. He is working with City of Atlanta to clear these charges.”

Sheriff Mann: “i am part of law enforcement… appreciate APD & the job that they do.” Arrest a misunderstanding. “Looking to clear my name” https://t.co/UomlUWWwHe