A Republican nominee to the DeKalb County Elections Board said LGBTQ people live a “vile” and “pathetic lifestyle” and told an elected official she would spend an “eternity in hell” for being transgender.

Paul Maner made the comments in Facebook posts unearthed and provided to Project Q Atlanta. He was nominated by the DeKalb County Republican Party to fill a seat on the county elections board. His anti-LGBTQ views, among other controversial statements, sparked outrage and ultimately tanked his nomination.

“He has a history of xenophobic, racist and anti-LGBTQ behavior,” said John Jackson, chair of the DeKalb County Democratic Party. “He believes in the big lie President Trump stated that the election was stolen. He is not worthy of any position that requires governing.”

“I have religious reasons to reject your chosen demented lifestyle, and I won’t cross that line,” Maner wrote to Koontz. “God comes first in my life, and I pray you repent before it’s to [sic] late. An eternity in hell won’t be worth the lifestyle you choose.”

Koontz told Project Q that she “can’t think of a worse person” to appoint to the DeKalb elections board.

“I think his own words and past actions speak better than anything I could say as to why,” she said.

“Let me be clear, and specific,” he wrote. “You’re violating my religious freedoms when you use, or threaten to use force to make me accept, condone or endorse your pathetic lifestyle.” 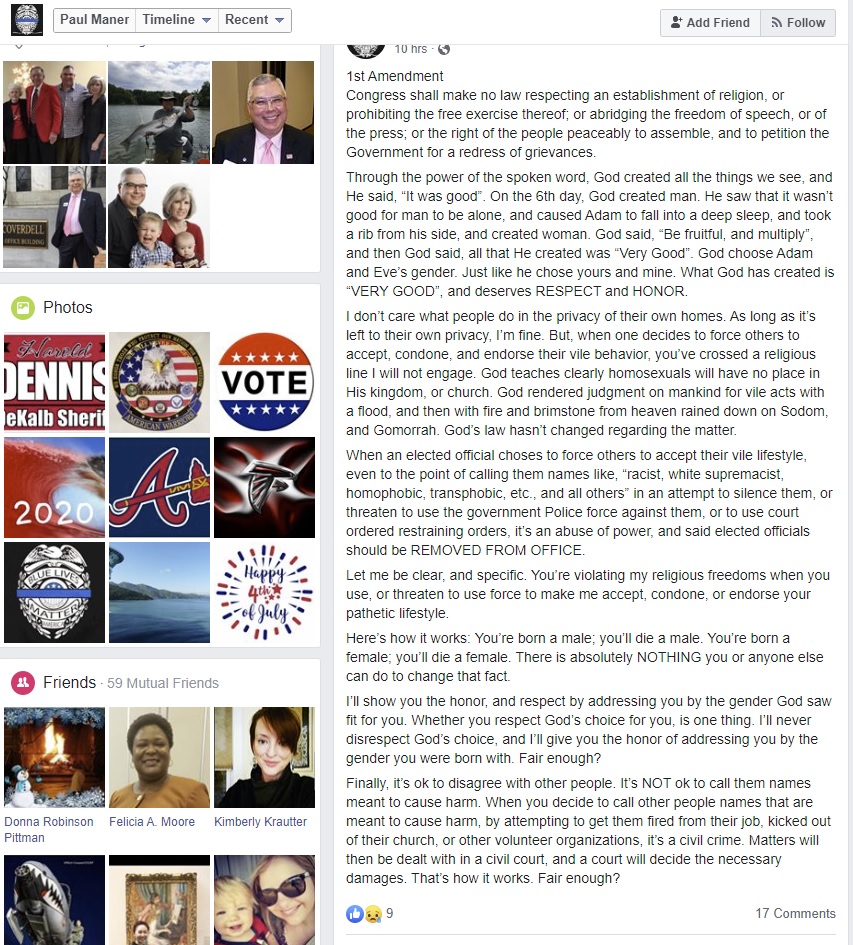 The election of Doraville’s second LGBTQ council member and first openly LGBTQ mayor appeared to trigger Maner in 2019. He posted pictures of police officers in pink uniforms and a police car with rainbows painted on it and mocked the images as “the new Doraville police cruiser and uniforms” that December.

“The city cares more about having more of the alphabet (LGBTQ) community move in, than focusing on providing it’s [sic] citizens ‘A good place to live,’” he wrote. “It wouldn’t be out of the realm of possibility to have the LGBTQ flag flown from city hall. Good luck. The decent people left in the city need it.”

Maner then tagged Koontz, Mayor Joseph Geierman and the rest of the city council. Gay IT professional Andy Yeoman won a spot on the council one month before Maner’s Facebook post. Geierman became the city’s first openly LGBTQ mayor in a landslide win just two days before Maner’s post.

Maner and the DeKalb GOP chair did not respond to Project Q’s questions about his Facebook comments. 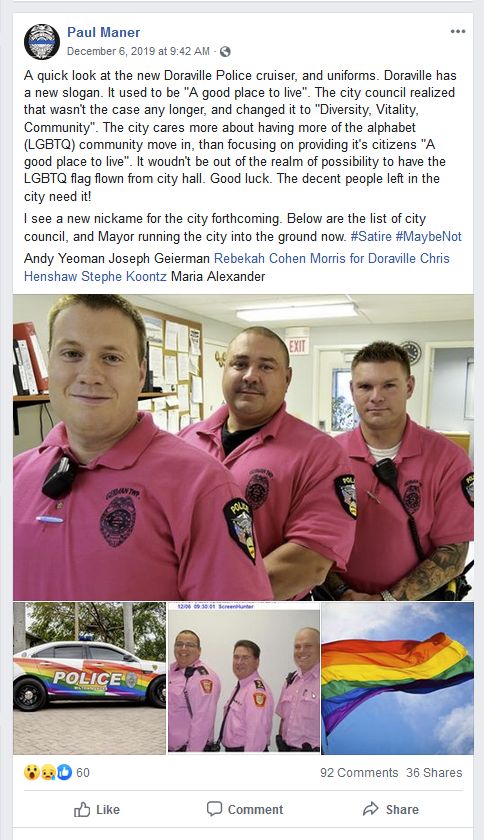 “The decision to reject his name as a nominee was based on an extraordinary number of phone calls and emails to Judge Jackson about Mr. Maner ‘s candidacy as a nominee and a determination after review of the same, that another more suitable candidate would need to be considered for the Board of Elections,” she told the AJC.

Jackson asked the DeKalb GOP to submit another name for consideration.

Maner unsuccessfully challenged then-state Sen. Fran Millar in a 2016 GOP primary. In 2020 he falsely claimed that the son of U.S. House Rep. Lucy McBath was killed in a “drug deal gone bad.” McBath’s teenage son was murdered outside a Florida gas station in 2012 after a dispute over the volume of his music.

This story is made possible by Google News Initiative’s Journalism Emergency Relief Fund.