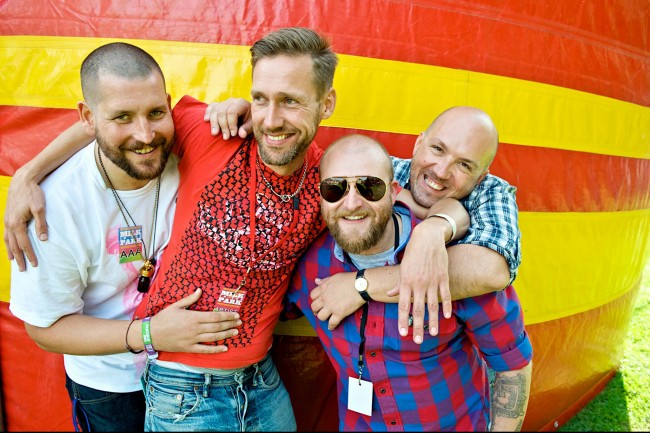 All the way from the UK with a home base at Eagle London and infamy from Manchester to points abroad, Horse Meat Disco is a party and space a collective of colorful gay London DJs creates as a “queer party for everyone.” The result finds packed-out dance floors as they proudly pump the sounds of an era known for queer celebration.

When they hit Heretic on Saturday, February 17, under the watchful eye of Vicki Powell’s Deep South gang of hosts, performers and opening acts, expect something wild. Horse Meat Disco’s queer revival vibe make for a most sweaty, celebratory shakedown.

When it comes to Horse Meat Disco, it’s all in the name: 1970’s disco forms a backdrop of a quintessential era in which gay bars became less obscured and gay and lesbian communities strengthened, even as they were often under attack. That was when queer culture found a niche in nightlife, made significant segues into popular culture, and created spaces for people to connect to their community, hook up, hang out, and live out loud and outrageous. Today you’ll find Horse Meat Disco dishing it out with zero shame, re-incorporating those funky melodies from the polyester limelight of the past.

It’s tre fresh, but it’s also more than updating queer dancefloors past for the modern age. With a universal understanding of mixing the best of disco with bits of techno, soul, hip hop and even jazz, it’s no surprise this group draws diverse audiences with a wide age range of musical interests. They stir the most divine musical smorgasbord into a slick new retro-and-Deep House mashup, and their intuition for blending catchiness and coolness perks up even the most blasé listener.

Appropriately for us ATLiens, Horse Meat Disco’s cohesive interpretation of past eras is a perfect compliment to the styling of queer Atlanta’s resident badass, DJ Vicki Powell. As long time innovative curator, her creation of party superteam Deep South already boasts a lineage of bright energy that Powell is known for.

As one of the opening DJs for Horse Meat Disco on Saturday, Powell’s vibe is always versatile, with everything from waves of boom-y bass lines to ambient smooth sultriness, and always effortlessly tied together with dance-your-ass-off beats. Her friendly, unpretentious personality is reflected in not just her selections but the tone she sets from the DJ booth.

Community has always been very important for Powell, a quality shining from her Deep South family. Her more-the-merrier attitude brings all the queer babes out in hoards from slices of many micro communities from rad fae to trash queen, drag diva to dyke royalty.

Local DJ Brian Rojas also spins before the main attraction at Heretic on Saturday. He shares with Q a refreshingly optimistic view on the state of ATL nightlife.

“I have noticed the queer underground scene in Atlanta is now more diverse than ever, both in the crowd and on the dance floor. I hope more people are encouraged to make themselves more visible and get more involved.

The future of the queer DJ scene in Atlanta is bright, and I hope it continues to rise while we lift each other up and support one another by not only promoting but showing up and being present.”

More Deep South events are planned throughout 2018, including a new series in Old Fourth Ward.

Horse Meat Disco goes down on Saturday, February 17 at Heretic, 10 p.m., plus an as-yet-announced afterparty with a bathhouse, sex positive vibe into the morning light. facebook.com/deepsouthATL, hereticatlanta.com, horsemeatdisco-thealbum.com.

This article orginally ran in Q magazine. Read the full issue below: