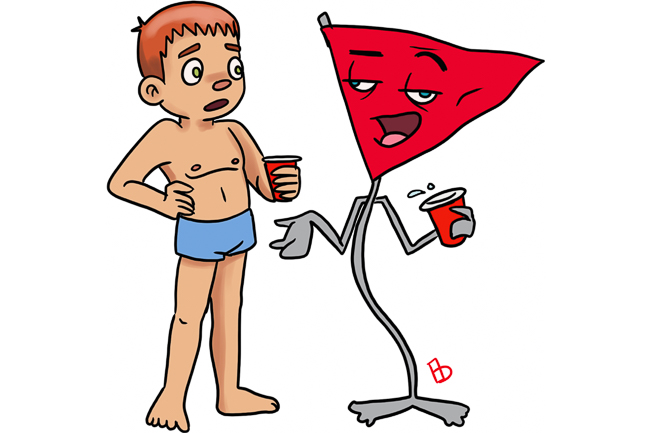 “He said I sent mixed signals, and that he doesn’t have time for games — all because I didn’t drop everything and drop my panties.”

I ran into a guy I’ve dated and slept with a few times at a pool party. He was feeling an extra helping of cocktails, and we were both enjoying him being a little more touchy-feely than usual.

He made a few drunk comments about marrying me and how much he wanted us to get serious. I was sober, and it was awkward, but mostly it was kinda cute. I even expressed my own interest in moving things forward.

At the end of the night, he wanted to go home together, and I declined.

It just wasn’t good timing. I’ve had issues in the past with mis-matched levels of alcohol, and his cocktails weren’t doing my attraction any favors. I didn’t say that, figuring he could go have fun and I’d see him again another time.

Apparently he fumed while ignoring my texts for days, then he went off. In his version, I sent mixed signals flirting without “sealing the deal.” He said he is “grown and doesn’t have time for games.” His hot take was based on me not dropping everything and dropping my panties.

From my perspective, I acted interested and kept it light while he was messy drunk. I tried to tell him I liked him, but he kept circling back to three points — I didn’t go home with him, I wasn’t ready for him, and he was too mature for it.

I really liked this guy. Should I give him time and try again?

Time out! Huddle up. This man just showed you who he is. Take a good, long look.

His drunk behavior is less an issue than his sober reactions later. Getting tipsy and handsy is nothing new. Unless he has an ongoing problem, drunk flirting is harmless.

Still, the field is littered with flags on the play. Let’s pick up one at a time:

He left you questioning your behavior, your past experiences, your decisions, your communication choices. Don’t fall for it. It’s an internal diversion from his own shortcomings.

Anyone who continually reiterates how grown up they are, isn’t.

His fragile ego took a blow after he made “all the right moves” and still didn’t get laid. Reminder: It is perfectly OK to decline sex for any reason or for no reason.

It’s not mixed signals to express attraction for someone and decide that sex is not on the table — for one night or forever.

Demoting you from marriage material to curb trash in one swoop proves it was never about you.

Dating is not a contest to see who is more interested. For someone who doesn’t like games, he played this one for keeps.

Someone who won’t talk to you until they decided where they stand, and who determines your motivations without your input, throws down the final flag. It says, “Run!”