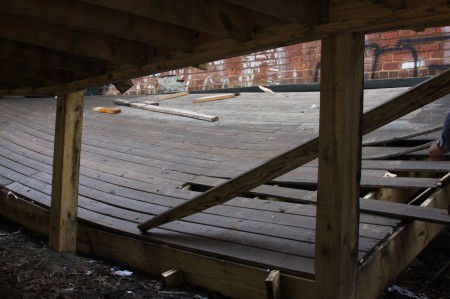 Other than a handful of reporters, the scene at My Sisters Room on Friday morning is quiet. But the damage left in the wake of a partial collapse of the deck outside the popular lesbian bar is apparent.

A large portrion of the wooden deck nearest to an exterior wall of the bar collapsed before 2 a.m. Friday. A dozen people were taken to the hospital, through their injuries were described as not serious.

My Sisters Room, which moved to its current East Atlanta location on Glenwood in 2007, was hosting its Xplosion Thursdays, which includes appearances by members of the Xplosion women’s professional football team.

A barback described to Southern Voice the “total and utter shock” when the deck collapsed.

Franky Laird, 21, said the bar, located at 1271 Glenwood Ave. in East Atlanta, had hosted a cook-out as part of its popular Xplosion Thursdays event.

Picnic tables were set up on the deck, and Laird said she was carrying a bag of ice and had just stepped onto the deck when it went down.

“It was total and utter shock. I couldn’t comprehend what was happening to me,” Laird said in an interview this morning at My Sisters’ Room, where she had returned after leaving Grady Hospital to show her girlfriend the scene of the accident.

“There were people on top of me, the trash can on top of me, and I was worried about everyone else,” she said. “Then I realized I was hurt, and it was really awesome to see Patryce pulling me out.”

Laird spent several hours at Grady for treatment of a concussion and a hairline fracture of her shin, she said.