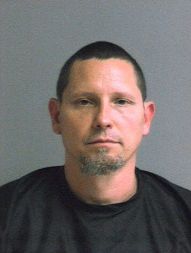 DeKalb police arrested a 52-year-old gay Decatur man and charged him with killing his boyfriend and dumping the body behind a tire supply store in Tucker. Douglas Bowman Anderson (photo), was arrested April 16, four days after an argument with his boyfriend, James Robert Green, apparently turned violent and he bludgeoned him to death and left his body behind a Safe Tire on Lawrenceville Highway, according to the DeKalb County Police Department. An employee of the business found Green's body and called police shortly before 9 a.m. on April 12, police said. "The male subject was located in the rear of the location in a wooden framed enclosure used to store old tires," according to an incident report. "He was lying on the ground face down with visible trauma to the right side of the head. The male was not conscious or breathing. There was blood found in several locations on the ground in the back parking lot and on the side of a U-Haul truck that was also parked in the rear of the business." Anderson was arrested on April 16 and charged with murder and aggravated assault. He remains in the DeKalb County Jail without bond. Anderson and Green, 27, shared a Decatur home outside Atlanta that is less than five miles from where Green's body was found. A DeKalb police spokesperson, Mekka Parish, said the pair were a gay couple and that the incident may have resulted from a dispute between the two that started in a nearby club. "Detectives do believe the men were involved in a relationship," Parish says. "The investigation continues to determine if there are any previous incidents of violence between the suspect and the victim." Funeral services for Green, who was born in Carrollton, Ga., and has a son, were held April 20.