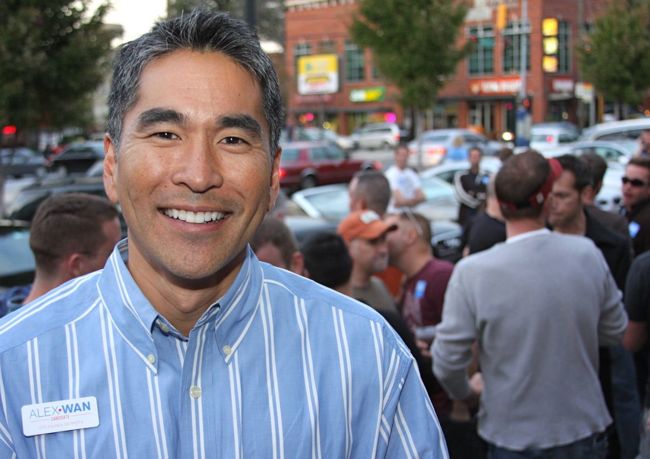 Should Cheshire Bridge Road be saved from its porn palaces, strip clubs and gloryholes or from a gay-led effort to neuter it? Two gay men with no love lost between them are squaring off over the controversial issue. What's in the crosshairs is an effort by Alex Wan (photo), the only openly gay member of the Atlanta City Council, to push adult-oriented businesses and other non-conforming enterprises off the strip and reinvigorate a stalled 2005 rezoning effort to clean up the red light district. The proposals would mean that the corridor's sex businesses -- including the legendary Cheshire Bridge gloryholes we recently explored indepth -- and strip clubs would be forced to move somewhere else. Cigarette-hating Wan calls it an effort to revitalize, not sterilize the street, while gay rapping journalist Matthew Cardinale says the street should be saved from Wan and his gentrifiers. The two men don't much care for each other, probably a result of Cardinale suing Wan and the Council over closed-door meetings. Wan has called him a bully. Their latest dustup, the fate of Cheshire Bridge, plays out on the pages of the GA Voice. Wan says gay residents support his efforts:

I have heard from those who support and oppose this legislation. While some are trying to paint this as negatively impacting the gay community, they would clearly be surprised at the large number of LGBT folks who have shared with me their excitement over the prospect of living, working and playing near a revitalized corridor containing a broader mix of shops, restaurants and other amenities that the area really should have. I fully appreciate that even with this legislation, changes won’t happen overnight. However, I appreciate that the community and businesses that have stuck by the corridor through thick and thin and have all waited patiently — at least 14 years and counting — for some meaningful changes to begin happening.

Cardinale says the proposals would sterilize the corridor:

These neighborhood associations who want so desperately to see porn stores shuttered, working families banished, and their property values skyrocket, should not get their way. The fact is, they knew exactly what neighborhood they were moving into when they chose to move here. Their complaints are not valid now. In Wan’s vision of Atlanta, people come home from their corporate jobs to their 2.5 dogs cheerily barking at their white picket fence, then they have dinner and watch television. In the real Atlanta, people have sexual needs and desires that they sometimes wish to act upon, sometimes involving bars, strippers, and dance clubs. Cheshire Bridge, our red light district, is a natural outgrowth and expression of our very humanity, which we should take pride in.

Wan's proposals, delayed in January, are scheduled to be discussed by the city's Zoning Review Board on March 7. Can't we all just get along and agree that RuPaul really has the answer to dress up Cheshire Bridge's gloryholes?