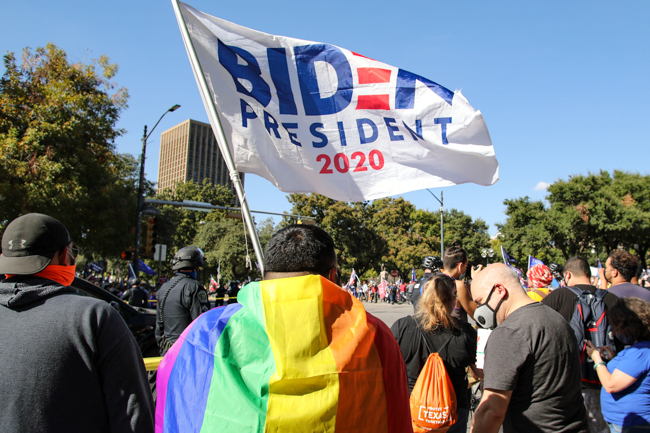 Lambda Legal, an organization dedicated to championing HIV and LGBTQ court cases around the country, spent much of the last four years filing federal lawsuits against regressive Trump administration policies.

“I am encouraged about the changes we will see with the new administration,” Shutt told Project Q. “We look forward to not having to sue the federal government as often as we have had to over the last four years.

“That being said, we know that our opponents will be in court trying to leverage a federal judiciary that they perceive as more friendly to their world-view to attempt to rollback our rights and stifle our progress,” he added.

Lambda filed more than 30 federal lawsuits across the country since 2016, and there are hundreds of Trump-era policies that need to be reversed, according to a list of priorities (read it below) Lambda set for the incoming Biden-Harris administration.

“When policies erased who we are and gave rise to discrimination against the most vulnerable among us, we fought for equal recognition and equal access,” states the Lambda staff’s announcement of the priorities. “When lawmakers pushed us out of workplaces, schools, and businesses, we fought to protect our rights all the way to the Supreme Court.”

In addition to rolling back what Lambda calls Trump-era “damage” to the court system, its 10 courtroom priorities range from protecting marriage equality and reversing transgender discriminations in the military and in healthcare to fighting so-called “religious freedom” bills that disguise a “licenses to discriminate.”

“Having agencies use their authority to meaningfully enforce protections against sex discrimination — which as the Supreme Court made clear last June, includes sexual orientation and gender identity discrimination — in employer health plans, restrooms in the workplace and schools, etc., could solve many problems causing real suffering right now,” he said.

All 10 of the Lambda priorities are critical to LGBTQ lives and the lives of people with HIV, Shutt added.

“All our recommended priority actions will significantly impact LGBTQ people and everyone living with HIV,” he said. “It is important to note that the courts are where all of the issues that we care deeply about will be litigated, so repairing the courts will be an essential part of achieving all of our other goals over next four years.”

Some 25 years after its opening, Lambda Legal’s Southern Regional office continues to play a role on the national stage. There’s a reason for that, and for Atlanta being the perfect home for the office, Schutt said.

“Living in Georgia for 20 years, I truly believe ‘so goes the South, so goes the country,’” he asserted. “I am inspired by our clients, attorneys, and supporters every day. I am especially grateful for our Atlanta-based supporters, cooperating attorneys, law firm partners, board members, and the volunteers with the Lambda Legal Atlanta Leadership Committee.”

Below are 10 actions that President Biden can take “on day one to begin undoing the damage caused by the Trump administration,” according to Lambda Legal.

Repair the Damage to our Courts

The Trump administration has damaged the integrity of our federal judiciary by packing it with right-wing extremists who oppose LGBTQ rights, reproductive rights, and civil rights more broadly. We call on the Biden administration to make the restoration of fairness and impartiality to the courts one of its highest priorities.

With the new majority on the Supreme Court created by Trump and increasingly hostile lower court appointments, we have every reason to believe our opponents will seek to undermine marriage equality for same-sex couples. Now more than ever, we need a robust ally in the White House who will vigorously defend and fully implement marriage equality, including things like the right of LGBTQ widows and widowers to access Social Security survivor’s benefits. The Biden administration must ensure that marriages between same-sex couples are respected and LGBTQ families are treated like all other families.

Stop the Granting of “Licenses to Discriminate”

At every turn, the Trump administration granted licenses to discriminate to health care providers, social service agencies, and private businesses, but we know that religious freedom does not include the freedom to harm people because of those beliefs. The Biden administration must reassert protections for LGBTQ people when we are at our most vulnerable in hospitals, homeless shelters, nursing homes, and foster care, and end the effort to grant a “license to discriminate” in the name of religion.

The Trump administration has called efforts to train medical and other personnel on the pernicious effects of systemic racism “un-American” and has issued an executive order banning the use of federal funds for such training. The Biden administration must reverse and repudiate the many racist orders and policies of outgoing President Trump, including the Muslim ban, its attacks on Black and brown communities, and its most recent assault on diversity training.

As commander-in-chief of the military, one of the world’s largest employers, President Biden must end the ban on open services by transgender people, and ensure that Pentagon leadership understands that our patriotic transgender servicemembers have a right to serve their country openly, as who they are, and free from discrimination.

School is tough enough without bullying from the federal government. The Biden administration must get the Department of Education back in the business of protecting the educational opportunities of all students, and in particular, should end its relentless assault on the identity and opportunity of transgender students.

Every American needs access to affordable, quality health care. The Trump Administration has been relentless in its efforts to undermine the Affordable Care Act and to restrict the ability of many—including LGBTQ people—to access care, regardless of who they are. The Biden administration’s Department of Justice should stop trying to undermine health care in our courts, and its Department of Health and Human Services should be fighting for quality health care free from discrimination.

Stop the Separation of Families

The Trump administration has shown total disregard for family ties when it does not approve of the families involved—such as immigrant families and those headed by LGBTQ people—and has used the power of the government to separate and undermine such families. A Biden administration must respect—not target and persecute—all families by immediately reuniting families separated at the border, by creating a pathway to citizenship that allows families to stay together, and by ensuring that LGBTQ families are treated the same in the eyes of the law as all others.

End HIV Discrimination in the Military

President Biden must direct the Pentagon to end its discrimination against our patriotic servicemembers living with HIV, and ensure that our military’s policies are informed by science and not outdated and stigmatizing views about who can serve our country safely, with honor and distinction.

LGBTQ people from around the world come to the United States, sometimes literally running for their lives. But the Trump administration has tarnished our reputation as a safe harbor by making it virtually impossible for people to seek refuge in the United States and enacting historically low ceilings on the number of refugees that can be admitted. The Biden administration must reestablish asylum rules to ensure those seeking safety from repression because of their sexual orientation or gender identity can find refuge in the United States.

A version of this article appeared in Q ATLus magazine. Read the new issue here: