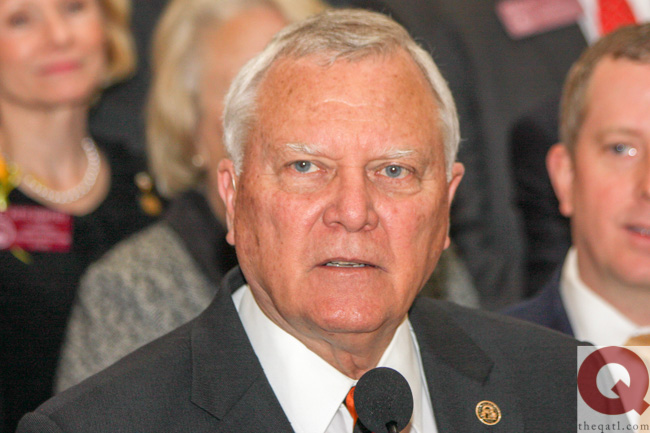 Gov. Nathan Deal deflected questions about a bill that would ban adoptions and foster care by LGBT people, declining on Monday to discuss the legislation and the controversy surrounding it.

Instead, Deal celebrated the passage of House Bill 159. The legislation reforms the state's adoption and foster care laws and, according to Deal, will help speed up the adoption process in Georgia.

“This critical and bipartisan bill streamlines the adoption process and updates Georgia’s adoption laws for the 21st century,” Deal said as he signed the bill into law during a ceremony at the State Capitol.

“It's a good piece of legislation and it has been the result of input of a lot of individuals and a lot of groups. The bottom line is that it is going to speed up the process for adoptions in Georgia,” Deal said.

But the legislation, from state Rep. Bert Reeves, had to be stripped of a provision that would allow faith-based agencies receiving public funds to refuse to serve LGBT parents and children before it passed the legislature in early February. That amendment, from state Sen. William Ligon, was added to the bill last year as it was hijacked by conservative Republicans on the Senate Judiciary Committee.

When the amendment was removed last month, Ligon introduced the anti-LGBT provision as a separate bill. That proposal sped through the Senate with a guarantee from Lt. Gov. Casey Cagle that it would pass. With a 35-19 vote, it did just that on Feb. 23.

Now the bill – Senate Bill 375 – is being considered by the House. It's already sparking criticism from LGBT advocates, progressives, business groups, actors and activists calling on the lucrative film and television industries to leave Georgia if the bill becomes law.

After signing the adoption reform bill on Monday, Deal responded to a question about the anti-LGBT adoption bill with a question of his own.

“You mean that pending piece of legislation that I don't comment on,” Deal asked.

When pressed, Deal again pushed back.

“Let's celebrate the fact that we've got this piece of adoption legislation today. If and when it comes to my desk, we'll talk about it then,” Deal said.

The comments were Deal's first about Ligon's bill since it passed the Senate.

Last year, Deal criticized Ligon's LGBT adoption and foster care ban when it was amended to the legislation he signed into law on Monday.

In 2016, Deal vetoed a sweeping anti-LGBT “religious freedom” bill in 2016 and has expressed “deep-seated opposition” to similar measures since.

But in a nod to the controversy surrounding Ligon's anti-LGBT amendment and now bill, Deal said “it was emotionally disappointing to a lot of people” when it tanked Reeves' adoption reform effort last year.