David Gest? Not gay. The Loaf says so. Sort of. 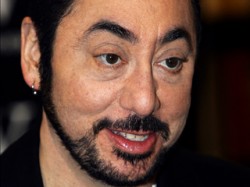 Atlanta-based sex columnist Mike Alvear is known to ruffle feathers with his sage advice. David Gest, Liza Minnelli’s ex-husband, is known to fend off speculation that he’s gay with veracity second only to Tom Cruise and John Travolta. Mix the two together and it gets a little combustible.

Alvear, who is gay and pens the Need Wood? advice column for Project Q Atlanta, is also the scribe behind the Sexorcist for Creative Loafing. That’s where Gest (photo), a concert promoter best known for his troubled marriage with Minnelli, comes in. In a Sexorcist published on March 29, Alvear tackles this question: A gay guy’s got a female friend who’s dating a gay guy. He knows; she may not. The gay guy asks the Sexorcist if he should tell her.

Starting to see where a sly reference to Gest and Minnelli might prove illustrative in this scenario? Alvear did, too. So he included a paragraph that referenced the celebrity pair. But Gest’s attorneys – like most we know – don’t have a sense of humor.

Within hours of Alvear’s column hitting the internet, Gest’s attorneys pounced with the same gusto Cruise used on Oprah’s coach and Travolta offers in the steam room. So they fired off a cease-and-desist letter to the Loaf’s parent company demanding that the offending paragraph be yanked. The paper, already facing a handful of lawsuits unrelated to this issue, decided it was easier to edit the column post-publication than to tangle with Gest’s attorneys.

They offered this explanation online:

Editor’s note: This column has been altered to remove a paragraph implying that David Gest, Liza Minnelli’s ex-husband, is gay after we received a strongly worded cease-and-desist letter from Gest’s attorneys.

Ouch. Alvear and the paper declined to provide the text in question to us, but it’s clear from the editor’s note what it was about.

The threat of a lawsuit over content is nothing new for the Loaf – or any media outlet. But in this case, the paragraph that caused the consternation for Gest’s legal team wasn’t critical to meaning and message of the overall piece, Henry says. Had it been the central tenant of Alvear’s column, the call to remove it from attorneys would “have been problematic for us.”

“Obviously this wasn’t the optimal choice on this, but it was the financially prudent one,” Henry says.

Alvear declined to discuss the incident.