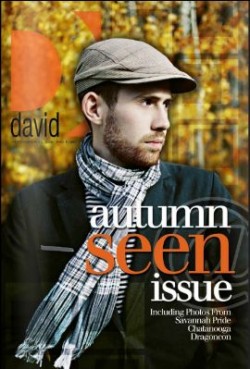 The boys at David magazine hit the road recently, tooling around to Pride events and stopping in at gay watering holes in Tennessee’s fourth-largest city. Too bad they can’t spell it.

The Sept. 15 edition of the weekly nightlife glossy promises on its cover pics from “Savannah Pride, Chatanooga and Dragoncon.” Too bad the locals prefer to spell it Chattanooga.

The staffs of David and Southern Voice love a good road trip. You’ll recall they skipped an issue of SoVo earlier this summer while they enjoyed the offerings of Gay Days in Orlando. Since, they’ve taken to I-20 to join South Carolina Pride in Columbia – more on that in a minute — hit Savannah Pride and headed north to Tennessee.

David and its sister pub SoVo have had their issues with quality control under new owner Gaydar; even their owner says so. But the recent cover gaffe could be due to a lack of an editor. SoVo’s been cycling through staffers, which could explain its recent brush with plagiarism, but David’s had some turnover, too.

In the July 14 issue, staffer Jesse Hancock writes the introduction to the magazine’s celebration of 600 issues – even if the vast majority of those came under a different owner – and touted his promotion to editor of the glossy. But two issues later, he’s knocked down to associate editor. By the Aug. 18 issue, he’s not even listed as a staff member. In and out of the top job in five weeks.

The magazine doesn’t list an editor in its current staff box.

Back to the road trips: Before heading to South Carolina Pride earlier this month, David and SoVo staffer Chip O’Kelley — listed in the magazine under “marketing & promotions” – couldn’t resist taking a swipe at Atlanta Pride. In a Facebook message (see image below), he posited that the upcoming event in Columbia, S.C. will “be better then [sic] Atlanta’s has been the past few years.” He followed that by calling Atlanta Pride incompetent.

The acrimony O’Kelley shares for Atlanta Pride may stem from his role as an owner of Pearl Day, an event in September 2009 that suffered from underwhelming crowds and gate receipts. Pearl Day reneged on a contractual promise to pay $9,000 to its three non-profit beneficiaries – Atlanta Pride, CHRIS Kids and Pets Are Loving Support.

Two Pearl Day owners – O’Kelley and Brian Sawyer – later joined Gaydar, which purchased the assets of SoVo and David in bankruptcy court. Without the $5,000 Pearl Day promised to Atlanta Pride, the non-profit opted to sever any relationships with companies in which O’Kelley and Sawyer are affiliated. That means David and SoVo won’t get booth space or take part in the parade during Atlanta Pride next month.

Pearl Day pledged $5,000 to Pride, an amount that was supposed to grow to $15,000 if attendance surpassed 15,000 people. The funds were earmarked for Pride’s operating budget, which has taken severe hits in the last two years due to the recession and a move to the Atlanta Civic Center in 2008 that was prompted by the city booting festivals out of Piedmont Park. 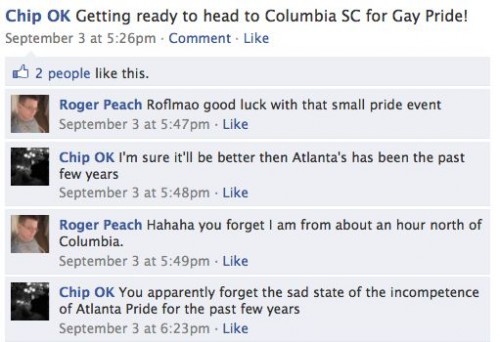