Dating your way through the Queer Law of Least Attraction 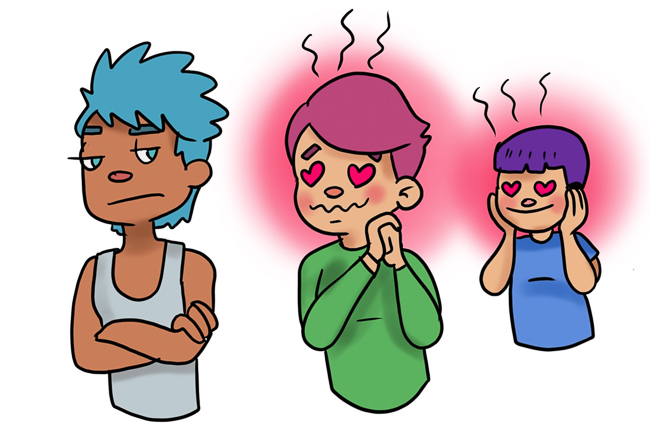 Why is everyone I want uninterested, and everyone I don’t want all about me?

I date quite a bit and hook up sometimes, but I really don’t “click” with anyone on a deeper level. When I do think there’s a chance at some emotional magic with someone I’m attracted to physically, that feeling quickly evaporates.

Most of the time, though, I swear no one who approaches me is my type. And even worse, it seems like everyone I think I want is not interested in me in the least.

When I was younger and just coming out, this was not the case. I’d just be talking to someone, and bam, click-click-click like clockwork, and I suddenly realized there was something special between us.

These days, why is “not my type” all I can attract? Where is that spark of connection?

Sometimes it can feel like there’s an unwritten law that the people we are attracted to are somehow the least likely to be the ones attracted to us, and vice versa. There’s actually something to that theory, but it’s not some universal conspiracy against your happiness or cruel joke to keep humans apart.

While you’re doing your best, there are sociological and psychological principles at play. You’ve heard of the Law of Attraction, but what about…

The Law of Least Attraction states that the person who is least interested has the most power in a relationship. The older we get, the more intensely we understand this concept, even subconsciously, and sabotage ourselves for people we might like if we gave them a chance.

The Law of Push and Pull is in effect more often, and it states that we like pursuing and being pursued. If you’ve ever played the dating game, you have probably experienced one party chasing, the other playing hard to get, then as the first person loses interest, the second turns around and starts chasing them.

If these “laws” sound like “normal, regular relationship stuff,” you’re not alone. Unfortunately, Hollywood, pop music, and first-world culture make many of us think these struggles are how love is supposed to work. It’s not.

The good news is that all of this is grown-up stuff, and you have leveled up to recognize and deal with it. The reasons your younger self seemed to stumble into connections is that 1. You weren’t trying too hard. 2. You had less relationship baggage, and 3. You were out there living your best life, making and hanging with friends, exploring the world.

Your younger self wasn’t dating as a means to an end, trying to force every round peg into a square hole. The number one thing you can do for your love life is stop dating and start making more friends. People you spend time getting to know and learning to love — whether you are attracted to them or not — are the key to not just a relationship, but happiness with or without one.

There's one more possibility: the ones that could really work out in a mature, mutual way scare the hell out of you. But that's a column for another day.

In the meantime, instead of dates, invite friends to live and laugh with you. Go to the movies as buddies. Do game night with a group. Sit in front of Netflix without ulterior chill motives. Once you see with your heart and not your loins, when you make real friends, that’s the relationship that can evolve into a love match, or the one who could introduce you to other like-minded people that have potential as well.