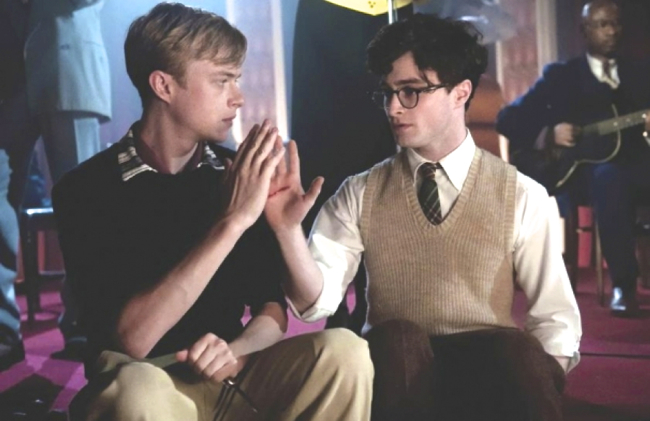 Radcliffe is growing into a notable hunk before our very eyes, and he’s breaking away from “Harry Potter” with very adult roles on stage and screen. Hello full frontal nudity in “Equus.” Hey there, Trevor Project PSAs for LGBT teens. Well hi, “Keep It Gay” on Broadway in “The Producers.” How you doin’, gay roles and public props to gay fans.

Well, put “Kill Your Darlings” (trailer above) on the list. Radcliffe’s permed-up turn as gay Beat poet Allen Ginsberg is being heralded as his best, most nuanced performance to date. The movie based on Ginsberg's pre-“Howl” college days has won several awards, and it was just a few points from Best Men’s Feature at Atlanta’s LGBT fest and recent Oscars honoree Out On Film last month.

“Darlings” opens in its own theatrical release in Atlanta on Friday at Landmark Midtown Art Cinema and at LeFont Sandy Springs.

“I don’t think there’s any difference between how one falls in love,” Radcliffe says. “People express love differently, person to person, but it’s not gender or sexuality related. The only difference it made was obviously the actual sex scene, of course…

“I was talked through it by the director. He would be telling me what I would be feeling in each take. Basically, gay sex, especially for the first time, is really f*cking painful. And [Krokidas] said that he had never seen that portrayed accurately on film before. He wanted it to look like an authentic loss of virginity.”

‘I was doing a gay sex scene and the director (John Krokidas) was giving step-by-step instructions. And the favourite note I have ever had was when we were kissing and the director shouted, ‘Not like that. Crazy sex kissing!’”

So scoff if you want, artsy uptight gays, but we won’t be mad at the rest of you if the scene is still your favorite 30 seconds of the film. DRad does wax on yet again for those who are expecting anything porn-level graphic.

“You don’t actually see anything. What’s graphic is the emotion of the scene. It’s a very vulnerable, slightly afraid moment. It’s beautiful and tender as a consequence of that.”

That’s OK, Daniel. You make the faces, and we’ll imagine the rest. Later, DeHaan and Radcliffe revisited their affair even further for the cameras, and for his part, director Krokidas says it’s “as physically and emotionally accurate as possible.”

Hot. Now, about Radcliffe and Jon Hamm in that bathtub.