Daniel Craig comes out on top 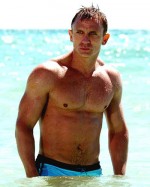 Daniel Craig, to the delight of many of his gay fans, comes out on top again.

The “Quantum of Solace” star helped break a new record for the British super spy series over the weekend. The movie brought in $67.5 million in ticket sales for its opening weekend, a Bond record that even topped his 2006 debut in “Casino Royale” when he plucked $47.1 million from movie-goers.

And about those gay fans, enamored with Craig since he emerged from the water in a blue square cut in “Casino,” the actor has this to say:

“I am just aiming to please as many people as I can,” he says. “That’s all right that I have a fan base in the gay community. That is good because I am getting more people to enjoy the movies and enjoy me in the movies.”

Craig opened up in an interview with David magazine, which reminds us that he’s played gay before he became famous as the face of the Bond franchise.

The actor hasn’t shied away from gay roles, including his passionate jail cell kiss with British actor Toby Jones in the film “Infamous” about Truman Capote.

In 1998’s “Love is the Devil,” Craig played a gay pill-popping petty thief in the story of the love affair between Francis Bacon and George Dyer. When Dyer breaks into Bacon’s house, Bacon invites him in for a romp in the sack before he’s allowed to steal anything from him.

The film also required that Craig be full frontal in a bathtub, of which the actor had no resistance. The closest Craig has come to a Bond full monty was creating a commotion and a run on bathing suits when he emerged dripping wet from the Nassau surf in his powder blue skin tight La Perla Grigioperla Lodato swimsuit in “Casino Royale.”

At the time, producer Barbara Broccoli said the scene wasn’t even intended to be one of the hottest swimsuit movie moments of all time. The story from the set is one for movie legend books: Craig went into the water for a scene. When he emerged soaking wet and walked toward the crew, many “gasped” out loud.

And gym rats will appreciate this bit from the interview:

In “Quantum,” Craig takes on the Bond role with as much athleticism as a professional sports player.

“I just go to the gym. There is no easy way to do it,” he says. “I wish there was, but it’s just getting into the gym and getting in the best shape I can. If there is a scene where I have to take my shirt off, I work out particularly hard, obviously.

“There is some narcissism there and I won’t deny it, but that isn’t the reason I make these films,” he admits. When asked what part of his body he is the most comfortable with or likes the best, he replied: “There’s plenty I am uncomfortable with!”