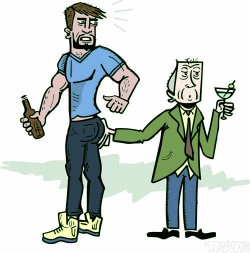 Grope me once, shame on you. Grope me twice and well, I’m going to slug you, perv. The scenario unfolded recently at Blake’s and – not surprisingly – the groper wanted the gropee hauled off to jail. You just can’t make this stuff up. From the Loaf’s Blotter:

They don't call 'em sexagenarians for nothing. During his security shift at a 10th Street gay bar, a police sergeant encountered a 64-year-old man who got sucker punched for doing a little good, old-fashioned grab-assing. "I went to the lower bar area and located a male who had a laceration to his head," the sergeant wrote. The man explained he'd been throttled on the dance floor by a person he described — ever so specifically — as a younger man with brown hair. And even though the bar was closing, the man insisted his assailant was still inside and he wanted him arrested. The sergeant wrote, "I went back into the bar ... and based on the vague description, was not able to find him," the officer wrote. "I did speak with several exiting patrons who stated that the man who got punched was grabbing a young male's buttocks." Patrons also said the young man warned the older man several times to quit grabbing his fanny. When the officer couldn't find the old man's transgressor, he got upset and demanded the sergeant's name and badge number. The sergeant said he wrote down his name and informed the man that since he was a sergeant, he didn't have a badge number. Then the man "stated that he knew the Mayor Kasim Reed, and was going to have me fired," the sergeant wrote. "I gave him the address to the City's Office of Professional Standards." Apparently, the gay bar had no video available of the alleged dance-floor smackdown.