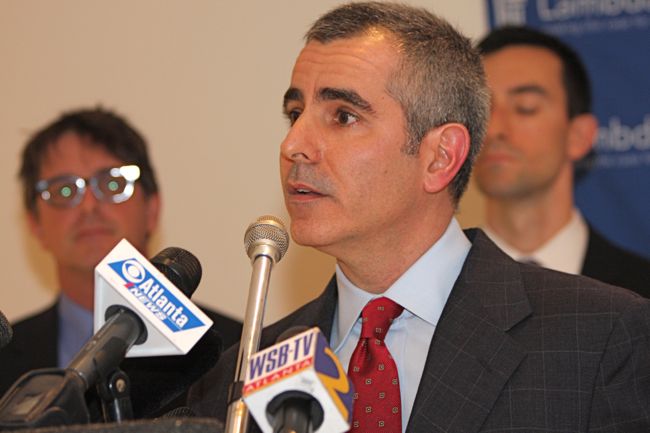 Ask attorney Dan Grossman about the legacy of the more than year-long legal battle with the City of Atlanta over the botched Eagle raid, and he’s likely to cite the procedural reforms mandated for the Atlanta Police Department.

Ask a casual observer of the case, and they’re likely to say it’s the $1.025 million settlement or the apology from Mayor Kasim Reed to the 26 plaintiffs and two businesses in the federal lawsuit.

The difference in replies hints at Grossman’s motivation for taking on a case that most other gay lawyers in Atlanta wouldn’t touch. The Princeton and Duke grad wasn’t in it for the money—he saw it as a vehicle to take on the blatantly unconstitutional actions of Atlanta police that many people and minority populations in the city accepted as routine.

It’s that dogged determination—and the hard work that uncovered the police abuses and destroyed evidence that finally pushed Reed and the city to settle the lawsuit—that’s now earning Grossman (photo) accolades from fellow attorneys and media outlets.

The GA Voice says Grossman “had the most significant effect on LGBT rights in Georgia in the last 12 months” and honored him with its inaugural LGBT person of the year award in its Dec. 24 issue.

This year’s honoree, attorney Dan Grossman, was an easy choice. In a sea of amazing local activists, Grossman stands out for his dedication and diligence in fighting for the civil rights of the Atlanta Eagle patrons who were victims of the illegal 2009 police raid on the gay leather bar.

The Sunday Paper named Grossman one of its five people of the year on Dec. 26.

Grossman doggedly pushed his constitutional cause despite the APD’s destruction of evidence and the City law department’s disregard for the federal judge’s deadlines. The frustrating discovery period might best be illustrated in this vignette: The City of Atlanta originally provided Grossman with a list of officers involved in the raid, which included some who were nowhere near the bar at the time. To make sure he didn’t accuse innocent officers, Grossman asked the APD to provide photos of the cops so the plaintiffs could identify them. In response, they sent him blurry, postage stamp-sized images, and one of an officer in a motorcycle helmet with the visor down.    Such cheeky maneuvers didn’t do the City any favors. In December, the federal court ordered Atlanta’s taxpayers to pay more than $1 million to the Eagle plaintiffs, and the APD will now have to abide by the constitution. The latter wouldn’t be a change for most police, but over the years the APD had gotten sloppy about policy; its standard operating procedures had lapsed into unlawfulness. With nothing to go by but those faulty SOPs, officers who didn’t know better were doomed to make mistakes. Under the terms of the lawsuit settlement, the SOPs must be rewritten over the next six months, and while officers will still be able to stop and frisk—and detain and arrest—suspects, now they’ll be doing it in a way that won’t get them sued.

For David Thomas and other plaintiffs, they can’t direct enough praise toward Grossman for his work on their lawsuit.

“I’m very proud Dan was able to come forward and take the forefront for all of us and for all of the city’s residents,” he said.

“As far as I’m concerned, he’s the face of gay civil rights.”