Dad’s got a boyfriend in ‘True Love Lies’ 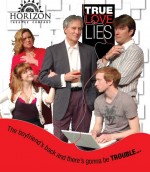 Brad Fraser’s new play “True Love Lies” peels the façade off a typical American family to reveal some secrets, including a big one involving the father. He talks with us about the show opening Friday at Horizon Theatre.

Fraser is the openly gay writer behind such heralded plays as “Unidentified Human Remains” and “Poor Super Man.” This is his first new work in several years; it debuted in 2009.

The cast (photo) includes parents Carolyn and Kane (played by Lala Cochran and James Donadio). They head up what is considered the All-American clan – until Kane’s former lover David (Robin Bloodwoth) makes an appearance back in their lives. Having David in the picture changes the family dynamics, including relations with the couple’s two children, Royce and Madison (Jimi Kocina and Tracy Vaden Moore).

The playwright says that “True Love Lies” is about more than being gay – or finding out Daddy once had a boyfriend.

“It’s not really about homosexuality, but not knowing who your parents are,” Fraser says. “You reach a point where they stop being parents and become people. Some people don’t do until their parents die. That’s put in a dramatic context here.”

Fraser’s characters are known for being fully fleshed out and often surprising. The character of Carolyn, for instance, is far from a naïve, unsuspecting wife. Another Fraser motif is the character of David, who has been featured in several of his plays.

As a 17-year-old, Fraser won a playwriting competition and has been writing ever since. He feels he has always tried to be honest as a playwright and to deal head on with sexuality.

“When I first started going to the theater, I realized how little I or others like me were reflected,” he remembers. “I want to not hide things, to be naked as a writer. When AIDS came around, it became more urgent.”

Fraser does feel that his work tends to reflect where he is in his life.

“I am 50 now, and my main character here is 50. I think it’s a more mature look,” he says, noting that “True Love Lies” is his most structured play to date.

For most of his career, Fraser has concentrated mostly on stagework, but he did get to spend three years working for “Queer as Folk.”

“That was the best job I ever had,” he says. “I was a staff writer. We had a terrific cast, and it was a safe and stimulating work environment. And because I was just a staff writer, if something didn’t work, it was never my fault!

“’Queer as Folk’ had its detractors, but I really believe that in the three seasons I was there, we told some important stories,” he adds.

Fraser is currently involved with a TV project he is not allowed to talk about yet, as well as a new play that will have its first reading in London soon.