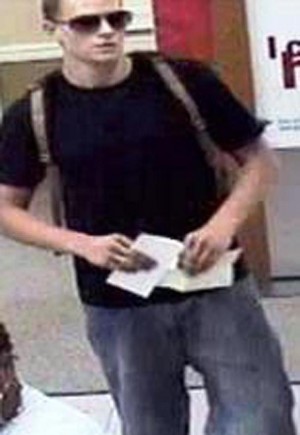 First it was a pair of camp drag bank robbers that would make the Armorettes blush. Now, it’s a Midtown bank robber cute enough to make you look twice before handing over the cash.

Ah, yes. The Great Recession is pushing most everyone to find new ways to make a buck — even cute guys in their mid-20s. It seems our laid-back robber — dressed in a t-shirt, jeans and sunglasses — robbed the Bank of America in the 1600 block of Monroe Drive on Thursday.

You know the one — sandwiched between Disco Kroger, Starbucks and LA Fitness, making it the gayest of all Bank of America branches in Midtown.

The robbery happened just after 3:30 p.m. at the Bank of America in the 1600 block of Monroe Drive, according to Atlanta police spokesman Otis Redmond.

Redmond described the suspect as white, 5-feet-7 to 5-feet-8 inches tall and weighing about 165 pounds. The robber was about 25 to 30 years old, Redmond said. He asked that anyone with information call the Crime Stoppers Atlanta tip line at 404-577-8477. Tipsters are eligible for a reward of up to $2,000, Redmond said.

Maybe our Midtown robber needed the bucks before a weekend out in the clubs. It was, after all, Madonna Gaga Rama at Jungle on Saturday. Or maybe he knew to make a grab for the cash before the queens hit the ATM to fill up their wallets for the weekend.

The strike on Thursday came just a short time after two men struck two other banks – both while armed with a gun and really bad wigs. With their wig selection, it’s likely even the Armorettes would kick them out of auditions. And while Wild Cherry Sucret did recently retire from the camp drag troupe, we’re pretty sure the legendary queen hasn’t taken up a new line of work.