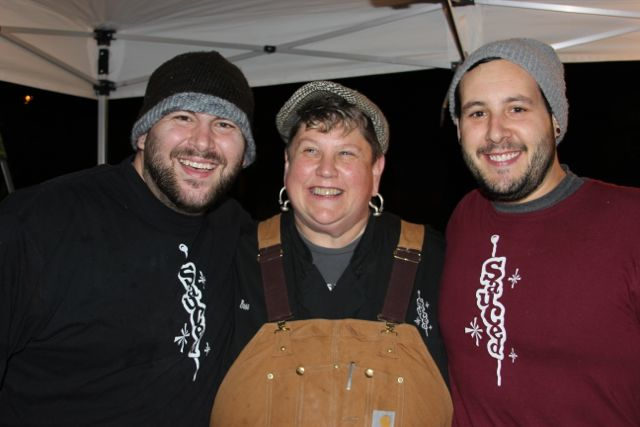 The big question on everyone’s mind at Tuesday night’s watch party at Sauced was whether the restaurant’s owner and gay Atlanta’s own Ria Pell would get chopped on “Chopped.” The answer was the sweetest possible outcome.

Anticipation built as Pell (top photo), the local favorite behind the lesbian-owned Ria’s Bluebird and Sauced, made it past the appetizer round on the Food Network show. While her guests at Tuesday’s watch party enjoyed the “Chopped” episode on a 10-foot big screen, things got even more frenzied when the main course saw another chef go home.

Pell hit the final dessert round and a 50-50 shot at taking home the $10,000 prize. When we say the outcome of the episode was sweet, by that we mean sweet like shortbread cookie with fruity whipped cream and lime dipping sauce.

As the judges polished off every bite of that creation on TV, the gathered crowd at the watch party enjoyed food from area restaurants, specialty cocktails plus music by DJs Osmose, Ree de la Vega, and Dookie Platters. As the reality drama played out, the gang at Sauced got the ultimate reward and cheered Pell’s nationally televised success.

It’s been a busy couple of months. What with overcoming that issue with the health inspector, kicking off Bluebird’s 12th anniversary with a Pants Off Dance Off rib cook-off, and now the “Chopped” triumph. Sweet victory, indeed.