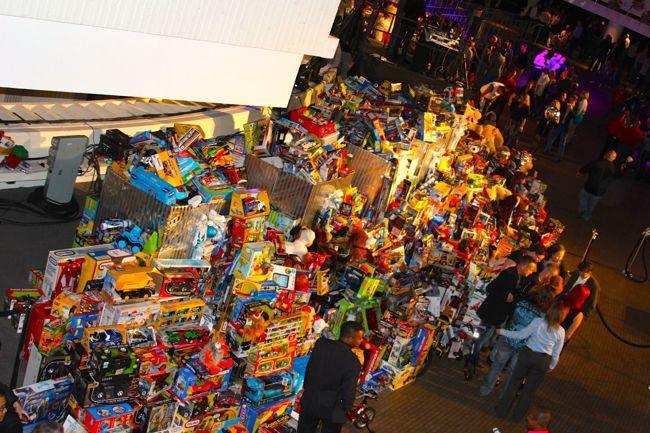 The big gay charity kickoff to the holigay season, early December’s Toy Party, suffered a dip in its numbers but still came through with thousands of toys and dollars for two-dozen groups that help children. Thousands attended (view photos) the 10th annual rendition of the event from the gay-run For the Kid in All of Us at AmericasMart in downtown Atlanta. Attendees at the Dec. 2 party that doesn’t do half-ass followed our tips for doing Toy Party fabulous. But there were fewer of them than in years past. An effort by organizers to raise even more cash for 24 beneficiaries may have backfired. For the first time, the Toy Party added a $5 cover charge on top of the usual general admission ask of an unwrapped toy with a $20 or more value. This year’s event also offered an Ultra Lounge for an additional $50 and a VIP Experience for $250. But Toy Party attendance dropped, according to organizers, who prior to the event predicted a crowd of more than 4,000. Some 3,200 people actually attended and helped contribute 3,343 toys and $3,990 in gift cards. In 2010, more than 4,200 people donated 5,000 toys and gift cards and the silent auction raised $37,000; a year earlier, the totals reached about 5,000 toys and gift cards and $20,000 from the silent auction. Organizers say a total for the 2012 silent auction is not yet available. The event has donated more than 38,000 toys and more than $474,000 to charity since its inception in 2003. "Our mission for 10 years has been to remind that same youth that they are not alone in this world. From the bottom of our hearts, thank you to all of you who donated toys and money -- whether it was online, at Toy Party, in our local drop boxes! It made a difference for thousands of children this holiday season," organizers said in an email to supporters last week. The toys and funds raises at Toy Party this year benefit 24 non-profit agencies in Georgia: AGAPE Community Center; AID Atlanta; All About Developmental Disabilities; Atlanta Children’s Shelter; Camp Horizon; Childkind; CHRIS Kids; Community Welcome House; Cool Girls, Inc.; Deveruex Georgia; East Lake Foundation; Easter Seals Foundation of North Georgia; Families First; Hillside; Idlewood Elementary; Jerusalem House; Lost and Found Youth, Inc.; Lutheran Services of Georgia; Nicholas House; Safe Path; Sheltering Arms;Malachi Storehouse at St. Patrick’s Episcopal Church; and Telemon. Photo by Sher Pruitt