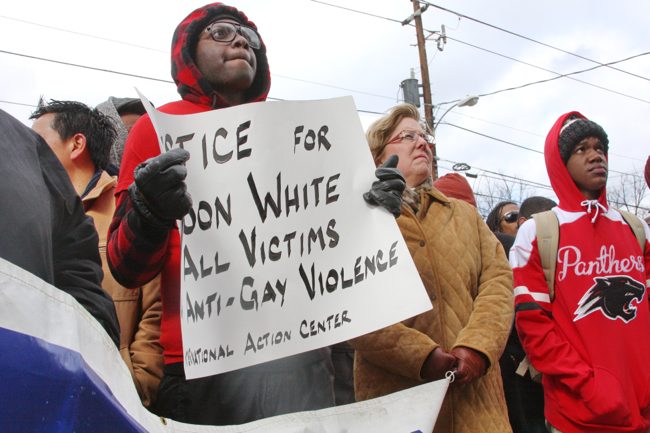 A large crowd of LGBT and neighborhood activists joined with several elected officials in Southwest Atlanta on Saturday to rally in support of a 20-year-old gay man who was beaten and attacked.

The crowd of about 150 people rallied on the steps of Iconium Baptist Church, which sits across McDaniel Street from the grocery store where Brandon White was assaulted on Feb. 4. Speakers called for supporting the downtrodden Pittsburgh neighborhood where the attack took place, closing the grocery store and passing a state hate crime law. White did not attend the event.

A heavy police presence during the rally included the LGBT liaisons for Atlanta police and Deputy Chief Renee Propes, the agency’s highest-ranking openly gay commander. As the rally got started on Saturday morning, Atlanta police announced the arrest of one of three suspects in the beating.

“It makes me very sad to see this type of violence directed against fellow human beings simply because of a person’s sexual orientation or because a person is trying to live their life,” U.S. Rep. John Lewis said. “There is not any room in our society for hate and violence.”

Lewis was among several elected officials who spoke at the rally, including Fulton County Commissioner Joan Garner and state Rep. Rashad Taylor, both of whom are gay. Newly-elected state Rep. Keisha Waites, a lesbian, attended the rally, as did City Council member Cleta Winslow.