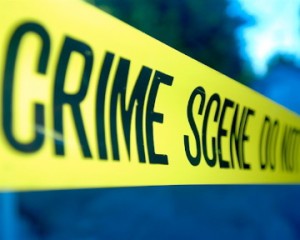 A cross-dressing, coke-snorting, purse-snatching Mexican managed on Friday to do what most others only dream of: Distract Atlanta media from their fear-mongering over snow by getting them to fear monger over “transvestite” immigrants.

Note to Atlanta media outlets: The term “transvestites” is derogatory. In this case, the correct description is most likely “cross-dressing.” Possibly even “transgender,” though none of the media outlets provides enough information to be sure which is correct. But “transvestite”? That’s bad.

Here’s what happened: The Gwinnett Daily Post published an item Friday morning about Serafin Gutierrez-Carvajal – a 33-year-old who goes by Sarah – and allegations that Gutierrez-Carvajal shoved a woman outside a Kroger, snatched her purse and ran on foot. Oh, yes, we almost forget this interesting detail: the alleged thief is the victim’s neighbor. 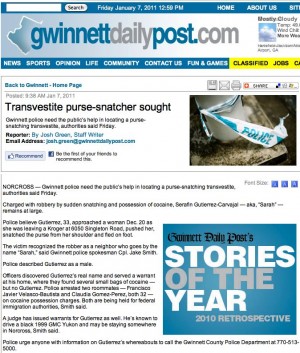 Note to potential criminals, transgender or otherwise: Don’t prey on your neighbors. Take MARTA to someplace else before shoving old women.

Gwinnett police, armed with a warrant from a judge convinced that the victim knew her neighbor, raided the Gutierrez-Carvajal home. Sarah wasn’t there, but two roommates and baggies of cocaine were present. They got pinched and shipped off to federal immigration authorities.

Note to roommates, cross-dressing or otherwise: Don’t horde coke in your house if your roommate is snatching your neighbors’ purses.

The Gwinnett Daily Post, in their best imitation of the New York Post, offered this headline to their eight-graph story: Transvestite purse-snatcher sought.

The Atlanta Journal-Constitution, keenly aware of their suburban competition now that they’ve pulled back from covering the region’s urban core, posted a nearly identical story about two hours later. The headline: Transvestite purse snatcher on the loose. 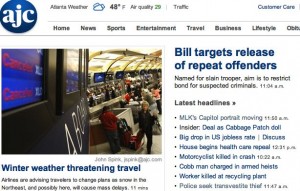 Nothing like keeping the offensive term and raising the stakes by portraying Sarah as some menacing crazy person with possible immigration issues. Nice job, AJC! Apparently, the AJC has dropped so many staffers and pulled away from covering LGBT issues that the paper’s once-stuffed-full-of-homos newsroom is now depleted of anyone who could have stopped this reporter (and her online editor) from copying the GDP’s offensive headline.

All of this is enough to make us hope local news crews get refocused on snow. Snow! Snow in the South! During winter! Now that’s something to get breathless about.