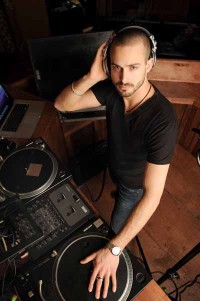 Those progressive, gay-loving scribes over at Creative Loafing unloaded their pent up Valentine’s Day frustrations on us last week with their annual “Lust List.” And true to form, it was LGBT inclusive.

So if you’re not still bitter from being single on Valentine’s Day, check out the blue collar hotties the Loaf presents in the eighth rendition of their list. You can also meet them in person Monday during the Loaf’s “Lust List Party” at Halo. Like the Loaf, Halo on occasion goes gay, too. Mostly on Thursdays for Blur, but you never know.

This year, the token gay is none other than Jay McCracken (photo), the DJ with the piercing eyes and smoldering looks that you can find spinning late into the night Tuesdays at Opulence. He also models, which earned him inclusion in our Morning Fix, and is among the hunks included in Richie Arpino’s “Men in Black | White.”

His Lust List profile includes a few tidbits we didn’t know about McCracken, such as having his first crush on Brad Pitt and that his preferred cocktail is Patrón on the rocks with three limes.

What did you like best/least about your ex?
Strip clubs — that’s the worst. (The best was) Predictability.

On which reality TV show would you most like to be a cast member?
Probably on “Make Me A Supermodel.” Why not?

McCracken is just one of a dozen in this year’s Lust List, so enjoy checking out the others. The Loaf also compiled their other Lust Lists, so you can easily check out their past gays including Andrew in 2009, Josh in 2008, Kristen in 2007 and Troy in 2006. And those are just the ones we know about.