Crash tested: Can your condom do this? [video] 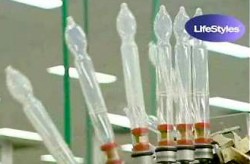 Perhaps you’ve considered hiring yourself out as a condom tester. Sorry, stud. The reality of crash-testing rubbers is more shower caps and shoe cozies and less naked than you’re thinking, but we still can’t help but find fascinating this peak into the lengths your condom can go. For AIDS Awareness Month, LifeStyles condoms invites us into a testing facility to show how safe their products are. Nice to know, but this Mr. Science Guy take is just plain funny, too. Air inflation to three-feet by one-foot (photo), vibrating metal dildo wheels, water balloon games and “electronic testing” – ouch! – look more like party tricks than any situation we’d want to put our penises. Sounds more like what happens in one of gay Atlanta's contests at the Easter Drag Races with the Armorettes. Those queens know how to blow up some condoms. In the end, though, it’s great to have your peace of mind with a side of giggle and an extra helping of agog.