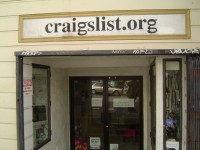 For gay guys who like to end their sexual encounters by leaving cash on the nightstand, you’re screwed. Figuratively, not literally, and you have Craigslist to thank for it.

The free classified site earlier this month shut down its “adult services” ads – you know, the ones where “escorts” will do escorty things like “massages” for cash – over mounting concerns that the ads led to prostitution. Shocking, we know.

Now, on Wednesday, Craigslist executives will march up to Capitol Hill for a hearing before a House Judiciary subcommittee to explain their action. Politicians, weeks away from facing voters, no doubt smell a law and order issue that might distract voters away from a faltering economy and continued joblessness.

But wouldn’t encouraging escorts boost employment and provide a distraction for out of work gays who want to drown their jobless sorrows in an hour or so of physical fun? At least one male sex worker thinks so. 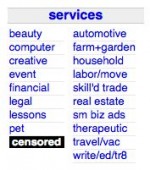 Anyway, Craigslist’s efforts – which first included pasting a censored label over the category and then altogether scrubbed it from their site – are hardly stopping enterprising gay (and straight) escorts from offering their wares elsewhere. There’s the “men seeking men” category in the Personals, where the ads are technically banned but easy to find.

There’s also RentBoy and Men4RentNow, among many others, where you can find a gay-for-pay friend. RentBoy offers 50 listings for “escorts and masseurs” right now in Atlanta, including one who promises to “stretch you wide.” Um, yeah. What massage technique is that?

All of that leaves us wondering if the Attorneys General in 17 states that demanded Craigslist drop the adult services ads really accomplished much of anything. At least metro Atlanta cops still have the personal ads to bait their undercover operations.