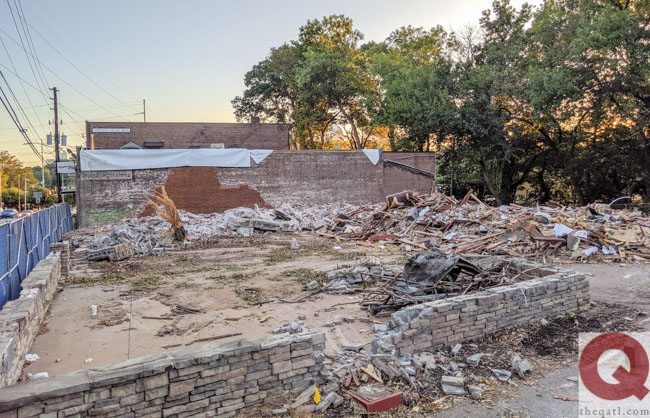 Cowtippers – a popular LGBTQ haunt for 25 years – met its maker on Saturday, with heavy-duty construction equipment reducing the building to a pile of rubble in a matter of hours.

It marked an unceremonious end to the restaurant, which served up steaks, fries and cocktails for years to LGBTQ crowds. Its expansive deck overlooking Piedmont Avenue also played host to scores of drag shows and fundraisers.

Metrotainment – the parent of Cowtippers, Joe’s and Einstein’s – closed the restaurant for good on Dec. 27 after first announcing it would shut down in January 2018. An “outpouring of support” convinced owners to delay the opening not once but twice.

It was the same sad fate that met the Armory. The former home of the club – half of a one-two nightlife punch that dominated gay Atlanta for decades – was torn down in 2013 to make way for apartments.

What will replace the legendary restaurant? A Chase Bank branch. Metrotainment – which opened Cowtippers in 1993 and bought the two-thirds of an acre property it sat on in 2002 – sold the property to a developer, who in turn is building the new 3,470 square foot bank.

The restaurant’s demolition marked the latest LGBTQ spot to disappear off Midtown’s collective gaydar. Jungle closed in 2017 and its neighbor Manifest was pushed out earlier this year. New Covenant Church of Atlanta, which was also housed in the same building off Cheshire Bridge Road with Manifest and Jungle, moved to Eastland Road in southeast Atlanta in March 2018.