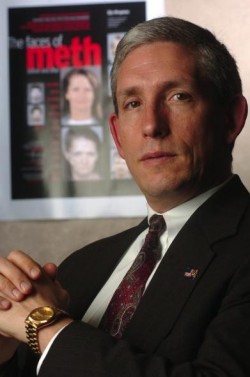 The Georgia Supreme Court on Monday upheld the conviction and life sentence given to Baretta Harold Pierce, a lesbian who killed the 4-month-old baby of her partner in 2005.

In a unanimous opinion, the court rejected Pierce’s appeal, which included claims of ineffective counsel and racially discriminatory use of peremptory strikes to pick an all-white jury. Pierce is black. The court denied her claims in a 15-page opinion.

“Viewed in the light most favorable to the verdict, the evidence presented at trial was sufficient to authorize a rational jury to find Pierce guilty beyond a reasonable doubt of the crimes for which she was convicted,” Justice David Nahmias (photo) wrote in the opinion for the court.

Pierce and the child’s mother, Candis Nikita West, were arrested April 9, 2004 by Cobb County police after a two-month probe into the child’s death. West pleaded guilty six months later to a lesser charge of child endangerment and was ordered to serve one year of a five-year sentence. She was released for time served after testifying against Pierce.

Pierce was convicted of felony murder, aggravated battery and child cruelty and sentenced to life in prison plus 15 years. She was found guilty of causing the child fatal brain damage and breaking both legs by violently shaking him.

In its opinion, the court lays out Pierce’s role in the infant’s death in graphic detail.

Pierce became romantically involved with Candis West when West was three months pregnant. The two moved in together. Throughout West’s pregnancy, Pierce abused West verbally and physically. Eventually, West gave birth prematurely to a baby boy, named Donte, who weighed less than four pounds. After they brought Donte home from the hospital, “Pierce would yell and curse at the infant for crying, pick him up by his pajama collar, spank him on the leg, and shake him,” the opinion says. She wouldn’t allow West to hold or nurture her baby, saying that would spoil him and turn him into a “punk.”

On the morning of Jan. 24, 2004, Donte was especially fussy and Pierce demanded that West “shut him up.” After dropping West off at work, Pierce drove the baby to drop him off at a daycare home. The woman who owned the home saw Pierce drive into the parking lot, but about five minutes later, Pierce called to the woman, saying the baby would not wake up. The woman later testified that when she went out to the car, Donte was “just limp” and “gasping for air.”

But Pierce did not call 911, and instead expressed concern that the child welfare agency would be called. Eventually, the woman’s daughter called 911, and the baby was rushed to Scottish Rite Hospital. The medical staff found that Donte had suffered severe brain damage.

“There was bleeding in his head, around the brain, and in all three layers of his retina,” the opinion recounts. “He also had extensive and severe optic nerve edema, or swelling. Both his legs were broken. Donte died two-and-a-half weeks later when life support was withdrawn. He was just four months old.” After an autopsy, the medical examiner concluded the baby had been killed by shaken baby syndrome.