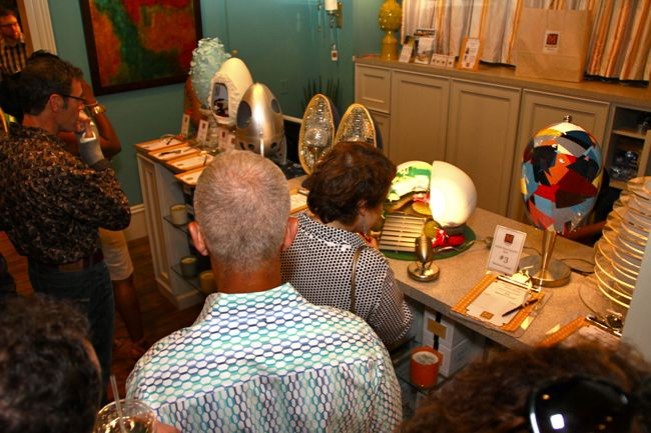 Lavishing in the swanky surrounds at Maison Atlanta, guests bumped to the beat of DJ David Knapp while downing specialty cocktails, filling up on small bites created by West Egg Café, and bidding in a silent auction of egg-shaped object d’art (top photo).

While this year’s class of gay male “debutantes” fills their own individual coffers in the race for the Cotillion Queen title at the organization’s annual Cotilllion Ball in September, the egg-citing gathering served as an extra way for the organization to add funds to its overall 2011 donation to AID Atlanta. It was yet another of several Memorial Weekend draws and hot topics in gay Atlanta that you missed if out of town.

Last year’s winner Joshua Bettis, aka Ava Von Seco (second photo left), was spotted in the crowd in full drag working the room reminding us that he is the reigning queen. He joined the regular guests as well as a slew of past and current debs in and out of their alter-ego drag.

Cotillion kicked off its months-long fundraising season for AID Atlanta with their annual Cocktails at Saks’ Men’s Store in April, and continued with a Mayday T-Dance.

Long before September’s ball, look for dozens of fun fundraisers by the individual debs throughout the summer, as well as the Cotillion board’s Studs & Suds Car Wash and Cotillion Auction & Cabaret that go toward the annual contribution to AID Atlanta. For a taste, click any of the links for photos from the events.