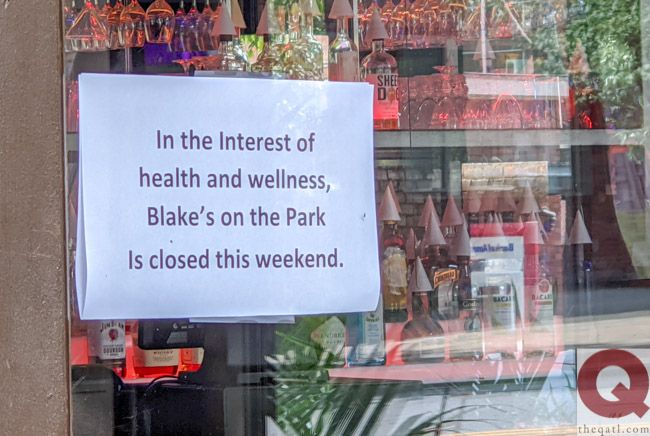 A coronavirus scare prompted a trio of popular LGBTQ spots – a dance club, a bar and a restaurant – to close over the weekend, while other nightlife venues revisited whether to require patrons to wear face coverings.

The closures further complicate a fraught summer for LGBTQ owners of businesses, which were closed for weeks when the coronavirus pandemic reached Georgia. As they slowly reopened, they faced the challenge of convincing customers and employees it was safe to return.

But that slow roll to open came to an abrupt halt for Heretic, Blake’s and Joe’s on Juniper.

Heretic closed on Saturday after two patrons who attended a dance party on June 20 later tested positive for COVID-19, according to the bar. On Monday, Joe’s closed after one employee tested positive. Blake’s posted a sign (photo above) to its doors over the weekend and confirmed on Sunday with a social media announcement that the bar had closed.

“Out of an abundance of caution, we have decided to postpone all scheduled events until further notice so we can continue to gather more information and adjust our operation accordingly,” Alan Collins, Heretic’s general manager, said in a statement on Saturday.

“This is, frankly, a very confusing and difficult time for nightlife for customers and business owners alike. There is a stark contrast in the guidelines coming from the state versus the advice coming from the health community,” he added.

The club expects to reopen in late July.

At Joe’s, one employee tested positive for coronavirus and two others had fevers, a spokesperson for Metrotainment, the restaurant’s owner, said. The restaurant will likely remain closed this week.

“Out of an abundance of caution, Joe’s on Juniper will be closed today, June 28 and the next three days. Some employees were exhibiting symptoms of COVID-19, and we have made the proactive decision to close and sanitize the restaurant in the interim. We are also asking each employee to be tested prior to returning to work,” the restaurant said in a Facebook post.

Bars – shut down in mid-March – were allowed to reopen on June 1. But Gov. Brian Kemp ordered them to remain at 35 percent capacity, a cap he extended on Monday to last until Aug. 11.

But some bars in LGBTQ Atlanta operate with restaurant licenses. Restaurants face a list of safety precautions to follow but a limit on the number of patrons allowed inside was lifted on June 16.

The closings come as Georgia reported new record highs in the number of confirmed coronavirus cases. That has pushed other LGBTQ-owned bars to reconsider whether to require patrons to wear face coverings.

At the Atlanta Eagle, owner Richard Ramey said during a Q Conversations with other LGBTQ bar owners on June 19 that he was considering requiring masks for patrons on the dance floor. A week later, Ramey announced that face coverings were now mandatory for anyone inside and that the scheduled opening of the dance floor during the July 4th holiday weekend was being delayed – until August.

A holiday dance party with DJ Neon the Glowgobear was also shifted from in-person at the bar to virtually online.

“With the uprises in the cases here in Georgia, the only responsible thing for me to do is require face masks inside the bar – or face coverings,” Ramey said in a video announcement on Thursday.

“I’m trying to do everything to keep everyone safe. Not only my wonderful staff but my friends and my Eagle family and my customers,” he added