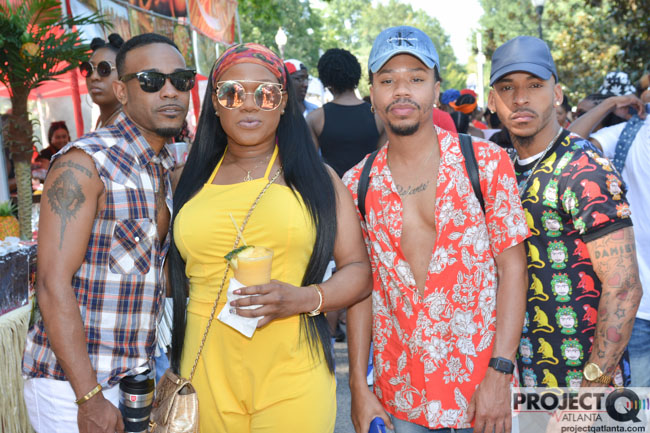 The coronavirus pandemic has put LGBTQ Atlanta’s largest events this fall in a holding pattern, with organizers of Atlanta Pride, Black Gay Pride, AIDS Walk Atlanta and Out on Film wary about increasing infection rates and waiting on event permits to be reinstated.

The pandemic already forced the postponement of the HRC Atlanta Gala & Auction in May and the cancelation of Joining Hearts’ annual pool party fundraiser in July.

Black Gay Pride is fast approaching on Labor Day Weekend. In The Life Atlanta usually holds panel discussions, fashions shows, comedy shows, a health expo and a film festival during the annual celebration. That will all look much different this year, according to ITLA President Rickie Smith.

“It looks like it will be more of a virtual Pride than anything,” Smith told Project Q Atlanta. “With the numbers on the rise right now, who knows what our city is going to look like in a couple of weeks? Keeping our people safe as we celebrate Pride is a big priority. I’d rather err on the side of caution.”

The Pure Heat Community Festival attracts thousands to Piedmont Park every Black Gay Pride weekend. But in May, Atlanta Mayor Keisha Lance Bottoms put in place a moratorium on the city accepting permit applications for events. The festival will go on only if the mayor lifts the moratorium by August, according to Traxx Girls owner Melissa Scott.

“We will be following all CDC-suggested guidelines and any new rules put in place by the mayor and the governor with regard to safety practices relative to COVID-19 and general health and safety,” she said.

The pandemic has also led to decreases in funding for Black Gay Pride organizers, further hampering the ability to put on the same size events as in past years.

The pandemic “immensely affected” funding from sponsors for Traxx Girls, according to Scott.

“The typical sponsors are very hesitant at this time with regard to their own lack of funding,” she said. “We are all being affected by this pandemic financially.”

ITLA has felt the strain as well, according to Smith.

“How do you support things when you’re not going to be able to have the masses attend? What are your sponsors looking for or asking for in return for their funds? It makes it kind of different, so in that area we’re all hurting,” he said.

“I just have a bad feeling in my gut about the whole situation and there’s nothing I can do about it. We seem to be helpless at the moment,” he added.

The pandemic has also put the 30th Annual AIDS Walk Atlanta in jeopardy. The event in Piedmont Park raises hundreds of thousands of dollars to fight HIV.

But the walk is on if the city lifts the moratorium on event permits, according to Imara Canady. He is the spokesperson for AIDS Healthcare Foundation, the parent company of AID Atlanta, which organizes the annual fundraiser.

“We’re obviously having internal conversations about what the full compliance of the CDC’s guidelines for physical distancing looks like,” Canady said. “And we’re still awaiting any further guidelines that the city may have from their perspective.”

Sponsors have also been lined up for the Sept. 26 event, according to Canady.

“There’s been no indicator from any of our partners about thinking that we should not do the event,” he said. “We’re just continuing to look at how we can do it by continuing to put safety first.”

“Being a public health organization that is promoting public health every day, ensuring the safety and well-being of all attendees is a top priority. We’re looking at a variety of plans in terms of ensuring it’s a safe event and it still has the same impact it has had in the last 29 years,” Canady added.

Out on Film goes mostly virtual

Out on Film is still a go at this point, according to Executive Director Jim Farmer (third photo center). The city’s LGBTQ film festival takes place annually at Landmark Midtown Art Cinema and other theaters across the city. Most if not all screenings will move online this year.

“Obviously, we hope that there can be some live components, but that’s just something we’ll have to wait and see over the next couple months,” Farmer said. “For us, a best-case scenario would be maybe a half dozen or dozen live screenings, maybe some drive-in performances as well and the rest would be online.”

Out on Film organizers will reevaluate as the event, set for Sept. 24 through Oct. 4, approaches.

“The biggest concern we have is the safety of our patrons,” Farmer said. “Even if theaters open and they’re physically able to hold customers, we have to determine if our people are comfortable going yet, or if it’s too early. A lot of our patrons are older and a lot are dealing with HIV.”

The pandemic hasn’t severely impacted Out on Film’s funding, according to Farmer. He expects the majority of sponsors to return this year.

“What we haven’t been able to do is look for new sponsors,” he said. “We’ve been hesitant about approaching new people for money simply because the timing seems off.”

A local news outlet in May reported that the city canceled the Atlanta Pride festival, but that wasn’t the case. Executive Director Jamie Fergerson told Project Q at the time that moving forward with the event depends on the ability to safely gather and on the city lifting the moratorium on event permits.

No official decision has been made yet regarding the event, Fergerson told Project Q earlier this month.

“We are working with the city to plan the event under the premise that the event will take place as scheduled,” she said. “However, in light of the current situation, there are many variables being constantly considered – including events altered for public health reasons or to amplify important calls to action.”

“People can donate through our website, and we will have several programs later in June that also offer options to help,” she said.