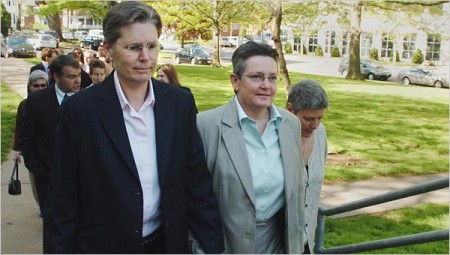 The Connecticut Supreme Court ruled Friday that same-sex couples have the right to marry, making the state the third in the U.S. that allows gay unions.

The 4-3 ruling says that gay and lesbian couples cannot be denied the freedom to marry under the state constitution, and Connecticut’s civil unions law does not provide those couples with the same rights as heterosexual couples.

Eight same-sex couples sued, including lead plaintiffs Janet Peck (photo left) and Carol Conklin, claiming their constitutional rights to equal protection and due process were violated when they were denied marriage licenses.

“I can’t believe it. We’re thrilled, we’re absolutely overjoyed. We’re finally going to be able, after 33 years, to get married,” said Janet Peck of Colchester, who was a plaintiff with her partner, Carole Conklin.

Connecticut will join Massachusetts and California as the only state to allow same-sex couples to marry.

“Interpreting our state constitutional provisions in accordance with firmly established equal protection principles leads inevitably to the conclusion that gay persons are entitled to marry the otherwise qualified same sex partner of their choice,” Justice Richard N. Palmer wrote in the majority opinion that overturned a lower court finding.

“To decide otherwise would require us to apply one set of constitutional principles to gay persons and another to all others,” Palmer wrote.

Reaction has been swift since the decision was issued Friday morning.

Connecticut Gov. M. Jodi Rell said that she disagreed, but will not fight the ruling.

“I disagree with today’s State Supreme Court ruling but as governor, I will uphold it. I continue to believe that marriage is the union of a man and a woman.

I also believe that the historic civil union law that I proudly signed in 2005 is equitable and just. We were the first state to enact such a law through legislative action and not a court mandate.

The Supreme Court has spoken. I do not believe their voice reflects the majority of the people of Connecticut. However, I am also firmly convinced that attempts to reverse this decision – either legislatively or by amending the state Constitution – will not meet with success. I will therefore abide by the ruling.”

The Connecticut Supreme Court recognized that gay and lesbian couples who form committed relationships and loving families deserve the same level of respect afforded to straight couples. The court did its job by making clear that the state constitution guarantees the same rights and protections for everyone.

This decision strengthens Connecticut families. We congratulate and commend the Gay and Lesbian Advocates and Defenders (GLAD), Love Makes a Family, which worked closely with GLAD on this case, and, of course, the courageous plaintiff couples and their families who looked to the courts to vindicate their rights.”

“This is a momentous victory for the people of Connecticut and all Americans who hold fairness as a fundamental value. The high court’s analysis comes down to this simple yet profound principle: All of Connecticut’s families deserve and need the protections, rights and responsibilities that support and sustain them, and should be treated equally under the law.

”We thank the plaintiffs for their courage and our colleagues at Gay and Lesbian Advocates and Defenders and their cooperating counsel for their outstanding advocacy on behalf of our community. We also applaud the years of work undertaken by our state partner, Love Makes a Family, which played a central role in creating a climate in Connecticut that made today’s historic opinion possible.”

State Senator Andrew J. McDonald, co-chair of the state Assembly’s Judiciary Committee, said he believes that gay couples will be allowed to marry in 20 days, barring attempts by opponents to delay the ruling with procedural maneuvers.

“I continue to expect a bipartisan effort to eradicate any remaining vestiges of discrimination,” McDonald said, hailing the ruling as a “dramatic reaffirmation of Connecticut’s commitment to civil rights and equality for all of her citizens.”

“The court has seen through many of the diversionary arguments of our opponents,” McDonald said, “and has firmly established that discrimination in any context and in any form is unacceptable and unconstitutional.”

“This momentous decision would not have been possible without the efforts of organizations such as GLAD (Gay and Lesbian Advocates and Defenders) and Connecticut’s Love Makes a Family. Today we salute their work, and we celebrate all the Connecticut couples and families who will now enjoy the same fundamental freedoms and legal protections as their neighbors.”

Bennett Klein, senior lawyer at Gay and Lesbian Advocates and Defenders, which argued the case before the Supreme Court, to the New York Times:

“Today is really a great day for equality in Connecticut. Today’s decision really fulfills the hopes and dreams of gay and lesbian couples in Connecticut to live as full and equal citizens.”

Peter Wolfgang, executive director of the Family Institute of Connecticut, to the New York Times:

“It’s an outrage, but it’s not unexpected. We thought all along that the court would usurp the democratic process and force same-sex marriage on Connecticut.”

Supreme Court Justice Richard N. Palmer, writing for the majority in the 4-3 ruling:

“Interpreting our state constitutional provisions in accordance with firmly established equal protection principles leads inevitably to the conclusion that gay persons are entitled to marry the otherwise qualified same-sex partner of their choice. To decide otherwise would require us to apply one set of constitutional principles to gay persons and another to all others.”

Janet Peck of Colchester, a plaintiff with her partner of 33 years, Carole Conklin:

Elizabeth Kerrigan of West Hartford, lead plaintiff with her partner of 14 years:

“I acknowledge that, because of its name, civil union is a different status from marriage. … I am unable to say that it is widely considered to be less than or inferior to marriage, or that it does not bring with it the same social recognition as marriage. It is simply too early to know this with any reasonable measure of certitude.”

“The State Supreme Court is the ultimate authority on all state law, and its ruling on the state constitution must be respected.”