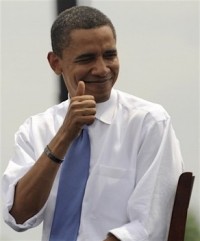 With both houses of Congress now weighed in on the legislation, which reauthorizes the Ryan White Care Act of 1990, the bill is on its way to President Obama (photo) for his signature. Obama sent a message to the House urging passage of the bill on Monday after the Senate decision.

U.S. Rep. John Lewis, an Atlanta Democrat and staunch supporter of LGBT issues, pledged that Congress would renew the legislation during a speech to thousands of participants at the 19th Annual AIDS Walk Atlanta & 5K Run on Sunday. Watch our video of his rousing speech.

The Ryan White Act, named for an Indiana teenager who contracted AIDS through a blood transfusion, has twice been extended since its original enactment. The program was last reauthorized three years ago for $2.1 billion annually.

The bill headed for the president’s desk authorizes a five percent increase each year through 2013, but Congress can actually appropriate a higher or lower dollar amount when it comes time for appropriations. The fiscal year 2009 appropriation was $2.2 billion.

The deadline for the program to expire was Sept. 30. Both the House and Senate passed appropriations through Continuing Resolutions that extended the funds through Oct. 31 while Congress worked to renew the program on a longer-term basis.

Project Q has reported that some $19 million of annual funds in Atlanta alone were in the crosshairs if a final extension bill from the full Congress didn’t make it into law.