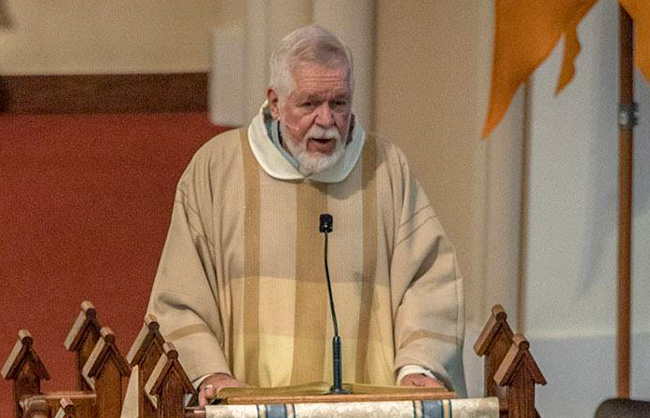 Anti-LGBTQ Catholics started a petition to remove an LGBTQ-friendly pastor from his position advising sexual abuse survivors in Atlanta, calling support of LGBTQ parishioners “a grave source of confusion and scandal.”

A group called Concerned Catholics of Atlanta started the petition after discovering that Monsignor Henry Gracz (top photo) of the Catholic Shrine of the Immaculate Conception is one of three spiritual advisers the archdiocese uses to help sexual abuse survivors. Atlanta Archbishop Wilton Gregory appointed Gracz to the position in 2011, according to the AJC.

The petition has about 1,800 signatures as of Wednesday afternoon.

A contingent from the Shrine of the Immaculate Conception has marched in the Atlanta Pride parade in recent years and the church regularly has a booth in the park during the Atlanta Pride festival. The church also hosts LGBTQ pot luck socials, and in March it hosted an Atlanta Freedom Bands concert.

Concerned Catholics of Atlanta wrote in the petition that the archdiocese was being “supportive of the LGBT agenda and lifestyle.”

“Join with us to demand Archbishop Wilton Gregory remove priests who promote the LGBT agenda from public ministry, stop supporting parishes who openly endorse LGBT lifestyles, activities and behaviors that are contrary to church teaching, and to stop ‘looking the other way’ from in our archdiocese,” they wrote.

Gracz told the AJC that he thinks a recent grand jury report in Pennsylvania detailing decades of child sex abuse by priests and a cover-up by church authorities is connected to the petition.

“When there’s great pain and there’s hurt, people are always looking for someone to blame, and the gay person could be the scapegoat,” he said.

Gregory told the AJC that “there are no plans” to remove Gracz from the advisor role.

“Msgr. Gracz is following the admonition of Pope Francis to accompany people on the periphery of society. His priestly heart is not closed to those who find themselves misunderstood or rejected,” Gregory said.

Meanwhile, the petition hasn’t appeared to steer Gracz away from LGBTQ issues. The AJC reported that The Shrine of the Immaculate Conception is one of two Atlanta-area Catholic churches hosting theologian and author Rev. James Martin on Oct. 20-21.

Martin’s topic will be “Building a Bridge: Showing Welcome and Respect in our Parishes to LGBT Catholics.”

We reached out to Gracz to discuss the petition and LGBTQ issues, but he did not respond.