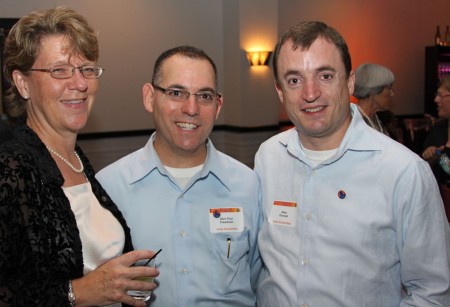 Tributes to Allen Thornell, the longtime LGBT activist and political insider, continue to pour into his Facebook page and media outlets just hours after his death. Thornell died Monday morning at Atlanta Medical Center after complications from a stroke he suffered Sunday.

In the wake of Thornell’s death, friends created a Facebook Group called Allen Thornell is My Hero! to record tributes.

I met Allen shortly after he moved to Atlanta, I believe he was 24 at the time. In addition to being a close friend, he was someone I had worked with in several different roles in several different organizations. Allen had an incredible spirit about him and political insight that was unrivaled. That was joined with a deep commitment and passion toward social justice and working with so many different communities.

So many people think of Allen in terms of LGBT activism, but his passion and interests and respect he earned because of it extended beyond that. He will leave a void in our community that will be all but impossible to fill. It is a time of great mourning and loss for us here at Georgia Equality.

Concerned with the welfare of so many others, [Thornell] was a tireless advocate for the LGBT community. Our prayers are with his family and our community, as his loss will create a void for so many.

He was surrounded by his loving partner, Chad Prosser and friends during his final moments. His death is a tragedy of tremendous magnitude. Concerned with the welfare of so many others, he was a tireless advocate for the LGBT community, and a loyal friend. Our prayers are with his family and for our community. His loss will create a void for so many.

We were shocked and saddened by his sudden loss today. Mr. Thornell was a giant in the Georgia LGBT community, making a vast impact in the lives of countless people at home and abroad through his work with CARE. His untimely loss is devastating to the community. He was a tireless advocate, the likes of which are uncommon and extraordinary. Our thoughts and prayers are with his partner Chad Prosser, his family, and his friends at this very difficult time.

I personally had the pleasure of working with Mr. Thornell during my tenure as the LGBT Field Director for Georgia for Obama. He was more than happy to work with me to elect President Obama and was a critical link in organizing the statewide effort. In sending volunteers and personal phone calls to see what more he could do, Mr. Thornell was a major supporter the likes of which I can never fully express my gratitude for. I’m extremely thankful for the opportunity to have met and worked with such a great man.

Chuck Wolfe, president and CEO of the Victory Fund (GayPolitics.com):

Allen wasn’t just a candidate, colleague and supporter of the Victory Fund, he was our friend. He was a genuine leader–someone who could speak out when it really mattered, but who also understood that working quietly behind the scenes was important to making real change. We will miss him greatly, and we hope his friends and family are comforted by the fact that Allen lived a profound life almost singularly dedicated to expanding freedom, fairness and equality for others.

Over the occasions that I spent time in his company and as a co-speaker at Macy’s Systems & Technologies PRIDE Panel Luncheon, I did come to realize his great kindness and compassion towards equal for all. And I do know that he was very highly respected throughout our community, and his good works changed the way we live today.

Allen was a friend and trusted confidant whose steady, positive approach to life and politics in the face of great obstacles has been an inspiration to me. I will miss him profoundly.

Cathy Woolard, the first openly gay person to win an elected office in Georgia. She worked on political campaigns with Thornell at together at CARE, where Woolard is executive vice president for Global Advocacy & External Relations (SoVo):

I think back now and he was so young when I met him, but he was so passionate, and so thoughtful and put together, maybe that was because he was only going to be here a short time.

Missing you my friend, you brought me into LGBT community fighting for equal rights. When I needed you for something, you always said yes. This is tough, why did you leave so soon…thanks for being there for the community and for me.

Allen was taken from us too early, but as one of the most accomplished public servants I have had the pleasure to know, his legacy will be long remembered by those of us who carry on his work for social justice and human rights for all. On behalf of the National Stonewall Democrats family, our hearts goes out to Allen’s partner, Chad and to all his family members and friends.

Atlanta Pride joins the entire Atlanta LGBT community as we mourn the loss of former Pride Grand Marshal Allen Thornell, who was chosen for that honor in 2004 for his tireless devotion to local and state politics and to LGBT equality.

On behalf of all members of the Georgia Log Cabin Republicans, I would like to express our deepest condolences on the sudden death of our friend and community colleague, Allen Thornell. Allen believed in all the best things about our country, and was a relentless and courageous voice for justice and equality for all LGBT Georgians. We send our heartfelt prayers to his life partner Chad Prosser, and his family at this very difficult time.