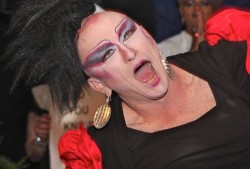 Nothing creates a stir quite like the announcement of the grand marshals that will lead the rainbow-clad procession through Midtown known as the Atlanta Pride parade. This year is proving to be no different.

Criticized in the past for their choices – the 2009 parade pickle that included an Atlanta cop just weeks after the Eagle raid – and then an approach that takes everybody – 120 grand marshals last year — the Atlanta Pride Committee again asked the public for nominations. In turn, they used those to select six folks, announced last week.

Not so fast, say the arm chair Pride skeptics. What about Dan Grossman, Don Lemon and Margaret Cho? Amid comments by supporters of Pride, Paul summed up the frustration of others with this:

And Atlanta has…drag queens, no-names, a columnist and a sweet fag hag who parties at Blakes with the boys. Way to go, APC.