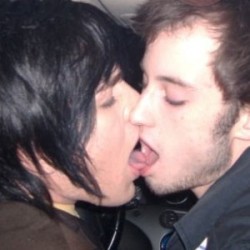 Glam gay rocker Adam Lambert spent the recent holiday weekend in Atlanta partying it up with friends and female strippers. Two commenters took exception to our pairing Glambert with football jock Tim Tebow and offered their own suggestions.

Nina weighed in, too:

Tebow doesn’t look like a “pretty androgynous elf” to me, so he’s most def NOT Adam’s type. RLL