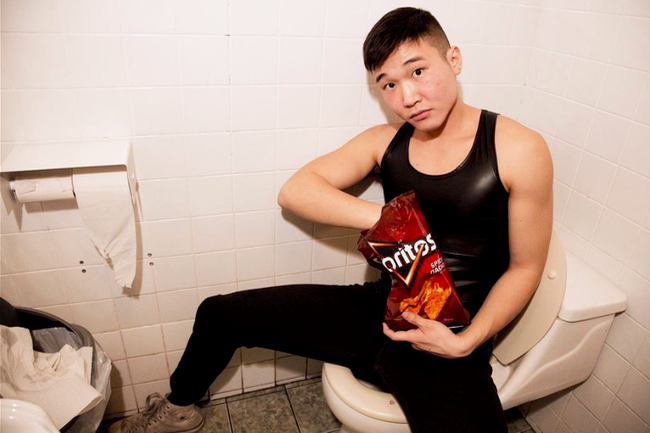 Joel Kim Booster is a comedian dynamo. He made his late-night debut on Conan, has been featured on Logo’s Comedy Cabaret, and his Comedy Central Presents stand-up special drops like pants in a sex club on Oct. 20. He hits Atlanta this week.

Booster makes his Atlanta debut as part of the Red Clay Comedy Festival, taking place at multiple venues in East Atlanta. The festival runs Sept. 28 -30, with his performances set for Friday and Saturday.

Out and proud, the comic offers us a taste of his comedic aesthetic while discussing his career, his inspirations, and his past experiences with Atlanta nightlife.

Will Red Clay Comedy Festival be your first time in the ATL?

First time doing comedy, but I've been before. In college, my coat got stolen at some club underneath a parking lot.

Other than performing, do you have other plans in Atlanta?

I've only ever come for aggressively heterosexual events – weddings, funerals, spring break) so I'd love to go to an actual, honest to god gay bar.

When did you know you were funny?

I think like a lot of gay men, I developed a sense of humor as a sort of defense mechanism as a kid. I figured out early that if you made fun of yourself, it took the air out of doing it for everyone else. Being sort of comedically self aware about my shortcomings has always been a strength since I was in the 8th Grade.

How did you get started in stand up comedy?

I started out as an actor and a playwright, a theater person. I slowly got a little frustrated about the limited scope that theater afforded me as an Asian American person (mostly as an actor). I never really connected with any of the roles I was getting stuck in, so on the suggestion of a friend, I started doing stand up as an outlet where I was playing a version of an Asian person that I recognized.

What makes a great audience member?

Someone who is engaged. It's not always about laughing the loudest or the hardest. Sometimes you just want to know the audience is listening to what you're actually saying, and getting a laugh out of those people, the ones who aren't really looking at their phones or falling asleep or checking in with their friend, that's really rewarding.

But also, laughing often and loudly is always encouraged.

Favorite way to waste a day?

Stoned, minimal clothes, in the sun.

Favorite thing to hear after you perform?

You were funny, but also hot.

Least favorite thing to hear after you perform?

Who is your favorite comedian to watch and why?

Jacqueline Novak. She is unlike any other comedian you will see, is absolutely brilliant, and just comes at comedy sideways.

I have laughed the hardest during a Jacqueline Novak set, and yet many of her jokes I could not retell with the same impact. You can't really intellectualize why you're laughing at some of them, they just hit you in this primal part of your brain. They're all the verbal equivalent of watching a guy get hit in the nuts. You can't really explain it, it's just funny.

I sound insane. Just go and see her live when she's in your city next. I believe she's opening for Mike Birbiglia on his next tour.

Other than stand up comedy, what makes you laugh?

I think cats who are bad at jumping are very funny.

Ask yourself a question and answer it.

Will you get laid in Atlanta?

If your comedy was a pop diva, what pop diva would it be and why?

Carly Rae Jepson. It's all very personal and reflective, but also a little blown out and absurd. And very, very gay!

No, I meant what celebrity would you like to see crushed.

Tell us one last thing that will make everyone reading cancel their plans and come see you perform?

I have an acne scar that looks like a state, and if you can tell me the state, I will buy you and your friends drinks.

What 13-year-old you say to adult you today?

They would be very concerned for my soul, I think. They would say they still loved me, just didn't love my behavior. I was still very set on being a youth pastor when I was 13, and while a part of me would probably be thrilled with where I've landed myself professionally, I was probably too repressed to really be jazzed that I made it doing dick jokes.

Any advice for aspiring queer comedians?

Don't feel pressured to do “less gay” material in the interest of having a more universal appeal. I do clubs all over this fucking country, and I don't stop doing material about my sex life or gay shit just because it's a room full of straight people in South Carolina. If the punch line is funny, people will laugh, no matter what the subject matter is. Just remember to write the punch line.