Comic Ben Evans comes for his gays at Jungle 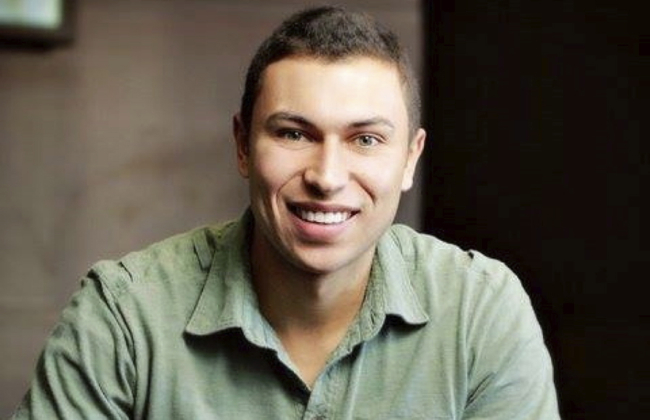 Atlanta comic Ben Evans isn’t a star yet, but he shines bright on the local comedy scene. His quick wit and charm have wooed and wowed audiences as resident host of Laughing Skull Lounge open mics, and now he comes for Atlanta’s gays. You’ll be glad he did.

Evans’ comedic stylings have graced the stages of all the major comedy clubs in the city and around the country. He brings his laugh riot to Jungle on Wednesday as headliner of the ABear Comedy Show, hosted by gay Atlanta funnyman Ian Aber.

Aber gets to know him below for your pre-show benefit, and you can taste his comedy in the video above. And oh yeah, you can also go ogle him as a shirtless dancing queen.

Tell us about your first time on stage.
The first time I ever did stand-up was in Seoul Korea for a hundred people over there teaching English. They had been having their own “Retro Olympics” doing crazy events in ‘70s style costumes, and we were the entertainment after about 8 hours of them entertaining themselves.

They were all dressed in these tacky ass clothes, I’ve never done comedy before, and I was supposed to do 15 minutes. Our stage was a picnic table with a desk lamp on it. This guy who looks like Chunk from “The Goonies” gets up and sings some folk music, and then I get up and do 15 minutes to polite smiles and the slightest nods of approval.

I was like “OK, whatever that is,” to the crowds reaction, but I didn’t feel bad about the set because the comic that went on after me got a “Come on Dude! Wrap it up!” from several audience members, so that’s a victory as far as I’m concerned. But I knew I could do stand up after that, because even though I didn’t do great, I wasn’t like “Well, that’s over.” I was ready immediately to try it again, just not on a picnic table in South Korea.

When did you know you were funny and could make people laugh?
Well Ian, I’m still not sure that’s the case. (Laughs). My mom had sent me some old report cards recently, and they said the exact same thing. “Ben brings a lot of enthusiasm and personality to the class. Everyday, I laugh at something he says. He can’t focus on anything.” That’s every report card in a nutshell.

Did growing up bi-racial influence your comedic style and sensibility?
It does now, but growing up I didn’t even know what the term racial ambiguous meant until two years ago. It was something that I didn’t really think about but people would always say stuff. I grew up with only white people, including my family members. My brother and sister are SPF 50 white people.

The material about being bi-racial in my act is a reflection of how other people have viewed me in the past. The Jeter stuff. I don’t think I look like Derek Jeter, but other people do so I was like “Fine. I’ll talk about that.”

This is something that I have only come to terms with recently myself, and my family doesn’t do the best job with it. I remember asking my Jamaican grand mother what our background is. How do you classify yourself? She wrote me this whole long letter about how labels don’t matter and God is the only thing that’s important. I was like “Well, that clears nothing up.”

Who were your comedic influences as a kid?
I was obsessed with black comics. It wasn’t until after the year 2000 that I even thought white people could be funny. Eddie Murphy, Chris Rock, Eddie Griffin to name a few of my favorites at the time. Those were the days of Napster too, so you would see a comic on BET’s Comic View and then go download every set you could find. I used to memorize bits from these comics and do these for my friends. I still have friends quote bits I used to do back to me.

Who are your comedic influences currently?
I don’t have one specific comic that is my idol or anything. Because I get to work with a lot of these people, it is more who I have worked with recently that really impressed me. Moshe Kasher is one who has such a good mix of material and living in the moment onstage, something I have been working on and exploring more in my own act, being more experimental with bits.

Atlanta comedy has grown considerably in the last few years, and with that more LGBT comics are on the scene as well. How do they fair on the mostly straight Laughing Skull stage?
I think it is a result of the Atlanta comedy scene growing in general. As more comics come up in Atlanta, there has to be a percentage that are LGBT. The funny LGBT comedians always do well. Funny trumps most anything.

Why has Laughing Skull booked many openly LGBT comedians over the years, including Jim David, James Adomian, Jen Kober, Fortune Feimster and Todd Glass?
You read that list and, to me, it is a list of great comics who happen to be LGBT, so the real question may be, “Why are so many great comics also LGBT?”