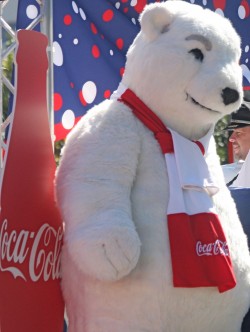 Despite a little “Shame” from gay activists, the deciding factor in King & Spalding dropping its controversial defense of the Defense of Marriage Act may have been pressure from Atlanta-based, Pride-loving Coca-Cola.

Coca-Cola – a top-tier sponsor of Atlanta Pride, a Pride parade-winning float creator (photo) and among top local score getters on the Corporate Equality Index – put a little behind-the-scenes pressure on King & Spalding to reverse course and drop its $500,000 contract with Republicans in the U.S. House, according to Talking Points Memo, which took a look into how the law firm ditched DOMA.

Sources with knowledge of the backlash confirm that one of King & Spalding’s top clients, Coca Cola, also based in Atlanta, directly intervened to press the firm to extricate itself from the case.

A Coca Cola spokesman declined to comment on or off the record for this story, but pointed TPM to the company’s long public history of support for equality and diversity.

Other King & Spalding clients likewise conveyed to the firm that its decision to take the DOMA case could cause them problems, both internally and with customers, according to sources who spoke with TPM. It also faced its own internal backlash.

King & Spalding inked a deal to lead the legal defense of the federal marriage ban on April 14. The deal ignited a firestorm of controversy and a call from the Human Rights Campaign for its “Shame” campaign, which among other things was set to target the law firm’s clients.

Fortune 500 clients like to steer clear of social issues. Well, mostly. Coca-Cola’s wariness of backlash over King & Spalding’s DOMA work hasn’t stopped the beverage company from cozying up to Chick-fil-A. Coke Chair Muhtar Kent is one of several speakers for the chicken chain’s Leadercast Voices of Change conference on May 6.

Chick-fil-A has irked the gays with its donations to anti-gay groups and a North Georgia foundation that bans same-sex couples. The Atlanta-based chicken chain’s conference is the target of a protest by LGBT activists.

In the wake of King & Spalding’s DOMA ditch, gay groups are beginning to warm up again to the law firm. The Stonewall Bar Association of Georgia hopes to reignite its bromance with the law firm, which is a sponsor of the group. Stonewall’s president is an associate at the law firm and the gay legal group remained mum until after King & Spalding ended its DOMA work.