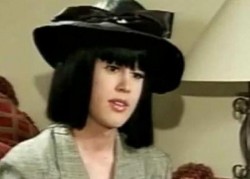 Nearly 1,000 people have become members of “Support Jonathan,” a Facebook page backing a 16-year-old Cobb County student who is at the center of a storm over the skinny jeans, wigs and vintage clothing he wears to school.

Last week, an assistant principal at North Cobb High School told Jonathan Escobar to dress more “manly” after he donned a pink wig and other typically feminine clothing during his three days at the school. He’s since stopped attending the school.

“It’s who I am. It’s my art. I want people to know it’s OK to be different, gay or straight,” Escobar tells the Associated Press. (Watch the video)

School officials say Escobar ran afoul of guidelines that say students can’t wear “clothing that causes a disruption,” according to the Atlanta Journal-Constitution.

Dillon said he believed Escobar arrived at school in a dress and heels. But Escobar said he never wore a dress. He says he opted for “skinny” jeans all three days with flats.

The district lists the dress code on its homepage. The rule states that students should “refrain from any mode of dress which proves to contribute to any disruption of school functions.”

Escobar says he left Miami to live with his sister in metro Atlanta, but quickly faced safety problems that went unaddressed at the school.

Jonathan Escobar says he wasn’t a disruption in the classroom, but he attracted attention in the lunchroom. “Everybody was surrounding me,” he said.

On his second day of school, Escobar says he was pulled out of class to speak with a police officer who told him he was concerned about the student’s safety.

“They should’ve told the students to back off,” Escobar said. “They should have never given me the option of homeschooling or changing who I am.”