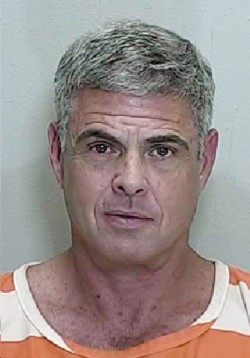 Former mortgage mogul and Blake’s On The Park owner Lee Farkas, now in a prison cell for 30 years, suffers another indignity in his fall from grace. The gay man who orchestrated the biggest bank fraud in U.S. history gets another comeuppance in a CNBC documentary. “American Greed” tackles Farkas in “Financial Home Invasion,” an hour-long piece that first airs on Wednesday at 10 p.m.. Don’t expect it to be all cocktails and drag queens, though focus on the word “fraud” and maybe there’s a drinking game in all of this.

In this episode of American Greed … Lee Farkas was a fast talker and a master manipulator. The high-flying mortgage mogul was once the owner of Taylor, Bean & Whitaker, at the time one of the largest privately held mortgage-lending companies in the U.S. But Farkas was a con man. For more than a decade he peddled fake loans and looted his company leaving thousands of innocent homeowners to live mortgage nightmares. His lies led to one of the largest bank failures in U.S. history. American Greed reveals the inner workings of a $3.5 billion mortgage scam!

Farkas was found guilty in April 2011 on 14 counts of conspiracy and bank, wire and securities fraud. He was sentenced to 30 years in prison for his role in a $3 billion mortgage fraud involving fake mortgage assets as chair of Taylor, Bean & Whitaker Mortgage Corp. In the process, Farkas pocketed more than $30 million to fund a lavish lifestyle of homes, autos, planes, restaurants and other businesses. Last month, the U.S. Court of Appeals in Richmond, Va., refused to reverse and of the 14 convictions. Six other people tied to Farkas pleaded guilty and testified against him. Farkas picked up gay Midtown Atlanta bar Blake's when it was purchased in 2004 by Thunderflower in a deal that also included Blu and WETbar. At the time Farkas was a manager in the company; Blu and WETbar closed in 2008. Blake’s was not listed among Farkas’ assets during criminal proceedings against him, and it’s not clear if the Thunderflower purchase was fueled with cash Farkas pocketed from the mortgage scam. Blake’s corporate ownership later changed and grew murkier. The bar wouldn’t clarify its ownership structure after Farkas was indicted. “American Greed: Financial Home Invasion” airs on CNBC on July 11 (10 p.m.), July 12 (1 a.m.), July 15 (10 p.m.) and July 16 (1 a.m. and 3 a.m.).