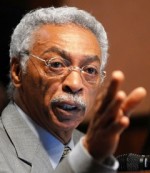 The Birmingham mayor who is entangled in a lawsuit over his refusal to hang Pride banners now has bigger problems: He’s charged in a 101-count indictment on federal charges that he took bribes to steer contracts to a friend.

Federal agents arrested Mayor Larry Langford on Monday, alleging that he used money from the bribes to pay a crushing debt for flashy clothes from exclusive men’s stores, jewelry and Rolex watches.

“Mayor LaLa,” as critics have dubbed him, was sued earlier this year by Central Alabama Pride for refusing to allow city workers to hang Gay Pride Week banners on city property during the festival in June. Earlier this month, the mayor asked the federal judge to dismiss the lawsuit.

Langford also snubbed Pride organizers by refusing to recognize the festival with a proclamation and informing organizers that he would not issue a permit for the parade, an annual event in the Alabama city for 20 years. The mayor’s office is typically not involved in issuing parade permits.

Langford later relented — a bit — and met with Pride organizers, telling them he would not stand in the way of the parade permit.