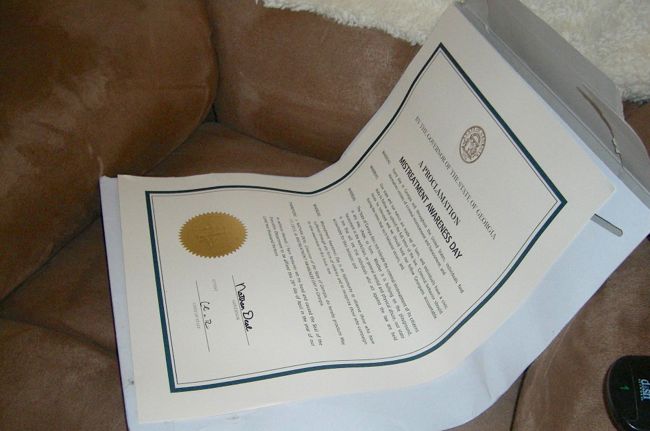 Gov. Nathan Deal will pull a little pork with the gays, but he can’t be bothered to proclaim his opposition to homophobia. Not surprising, given his horrid record on LGBT issues, but some gay activists are protesting anyway with an online petition.

Longtime LGBT activist Betty Couvertier asked Deal for a proclamation for International Day Against Homophobia & Transphobia Georgia, an annual event she’s organizing for May 16-17. What she received over the weekend was one for “Mistreatment Awareness Day.” It’s the second consecutive year that Deal’s office had pulled a name switcheroo. To add insult to the proclamation shenanigans, the document arrived crumpled and damaged.

The state Proclamation arrived yesterday…crumbled up, folded…and mashed in the mailbox…The state didn’t have the decency to send in a protected mailer…nor did they include a congratulatory letter…with it and I don’t understand what part of my request they didn’t understand…in writing I asked to be notified when ready so I could pick it up..plus there request form has a box to check…for pickup……the plan…a petition…more on that in a few days…but when it is posted…please sign…On May 14th…I will hand deliver to the governor’ office…so I can look at their homophobic christian piss ass faces…and ask if they can’t read…plus what gives them the right to change the name of a Global International Event…to Mistreatment Awareness Day……2014 can’t get here soon enough…the signed form is below…that indicated my wishes to pick up…

IDAHO supporters followed with an online petition calling for Deal to reissue the proclamation and use the event’s proper title. They also asked that office staff better protect the document for mailing.

In Georgia, well-known activist Betty Couvertier has been the IDAHO organizer for the last four years. For the second year in a row, Governor Nathan Deal’s office has issued a proclamation per Betty’s request to recognize the annual Atlanta and Georgia-wide events. Herein lies the problem – the Governor’s office refuses to officially address a day against homophobia, instead issuing the vague recognition of “Mistreatment Awareness Day,” as they did last year.

By sanitizing the word “homophobia,” Governor Deal’s office has quite literally engaged in it, by refusing to address the specific concerns of Georgia’s LGBTQ citizens. The Georgia House of Representatives recognizes the importance of this event by issuing a correct proclamation, as should the Office of the Governor.

By Tuesday, the petition had gained 83 supporters; organizers hope to gather 1,000.

Even the gay marriage loving Democratic Party of Georgia joined the fray.

The Governor’s office took it upon themselves to not only rename an International Event but also to treat their renamed proclamation with obvious disregard! Please sign the petition, and lets not let his slight go unnoticed.

Couvertier says she plans to visit Deal’s office on Tuesday to ask why the name of the event was changed in the proclamation.

But should Couvertier expect better? Not from Deal. He appointed an anti-gay pundit to a state board and ran one of the most anti-gay campaigns in Georgia history. And the Gold Dome isn’t so good at issuing resolutions for anything gay specific.