Atlanta’s annual ARTvision online art sale not only makes browsing and buying easy, it’s also a great way to help a local AIDS service agency without moving a muscle other than that overused mouse finger of yours.

ARTvision (Artists Reaching Through) is an online “event” that puts artwork up for sale to benefit charity each December. All you have to do is browse and buy. And you thought you were easy.

The project is the brainchild of Will Pollock (top photo, with one of the pieces from last year’s online fundraiser), a local gay writer, photographer and philanthropist who started ARTvision with works for sale by four artists in 2006. That spark grew into a full-fledged fire in 2008, when the permanent beneficiary became Positive Impact, Atlanta’s mental health-focused agency that helps HIV-positive people deal with the psychological ramifications of living with the disease.

That year, the online art sale raised about $3,000 for the agency. In 2009, some $7,200 went to Positive Impact through ARTvision. More than $4,300 has already been raised for the agency through this year’s event, which aims to raise $10,000 with some two-dozen works of art for sale. 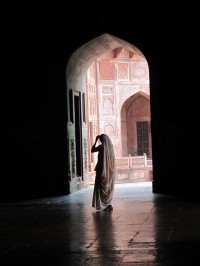 Since the artists donate the work, 100 percent of proceeds go to Postive Impact. The partnership is a natural fit, Pollock says.

“It’s just a tremendous organization,” he says. “They’re all just so committed to what they’re doing, and it’s palpable in their personas and everyday actions. But beyond the people, it’s such a great mission because folks are living longer, so it’s even more important now because they’re also living with the complications of it.”

“What’s unique about this event is that it’s something Will Pollock created on his own that he can use to give back to the community, so it’s personal,” Baker says. “It’s a way for people to connect with art and see what it can do for the greater good.”

ARTvision items remain on sale through Dec. 31. Go see what catches your eye, and maybe you can snag that holiday gift or a little something for yourself while helping a worthwhile cause.