A title like “Leaving Blake’s” could be the entree into a thousand stories. But the new novel by Clayton State professor Larry Corse makes it a complicated love tale with twists of intrigue in the heart of gay Atlanta.

OK, so that description might also kick off many stories you could tell yourself, but this one sets itself apart as a murder mystery that includes a diabolical right-winger, a gay mercenary and a local gay journalist. Hear excerpts and pique your interest at a reading at Outwrite on Wednesday.

Corse—a multi-talented and prolific author, playwright, poet, opera composer, professor of English and Theater, as well as the founder of the Larry Corse Prize for Playwrighting—returns to Outwrite Bookstore & Coffeehouse after a well-received reading of his poetry book “Two Golden Rings” in November. That collection details his marriage to his partner and makes a case for why gay marriage matters.

Corse (top photo) is also the author of three other novels and the memoir “Out Late.” He premieres his most recent Opera, “Someone Bought the House on the Island,” in Atlanta later this year. 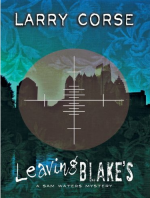 In “Leaving Blake’s: A Sam Waters Mystery” (second photo), look for near and dear landmarks as Corse’s young mercenary, Sam Waters, is sent to kill a gay journalist by a delusional right-wing Christian out for blood after a series of articles appears attacking extremists for their views on same-sex marriage.

But what’s a mystery without twists? Corse knocks readers in the face with a biggie when Sam falls in love with the man he’s supposed to kill in the name of all things righteous.

In the proverbial crisis of conscience, will love prevail or will murder rule the streets of Midtown Atlanta? Mmmm. Juicy.

Larry Corse reads “Leaving Blake’s” on Wednesday, May 12 at Outwrite.